Why I hate the Mary Wollstonecraft statue: would a man be ‘honoured’ with his schlong out?

Was a tiny, ripped nude really the correct way to honour ‘the mother of feminism’? 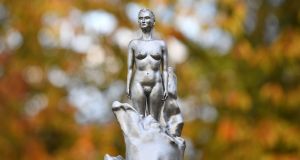 It took 200 years, not to mention a decade of fundraising, for a memorial to the great feminist thinker and writer Mary Wollstonecraft to be commissioned and unveiled on Wednesday at Newington Green in north London, where she lived and worked. For too long, campaigners felt, Wollstonecraft had remained relatively obscure and, from a public art perspective at least, unlauded.

Yet the work, by Maggi Hambling, has been met with an almost immediate backlash, with people, myself included, expressing their disappointment that this tribute should manifest itself in the form of a silver nude female figure, echoing the way the female body has long been objectified and idealised by male artists, and offering little in the way of innovation or commentary on the groundbreaking work of the woman hailed as the “mother of feminism”.

The campaign group must have had some idea, surely, that this would be the reaction. You don’t select an artist and commission a sculpture featuring a naked female body as a way of honouring a woman such as Wollstonecraft without knowing that it would raise some eyebrows. The figure is supposed to represent an “everywoman”, we are told, but the campaign was called The Mary Wollstonecraft Memorial Project, and it campaigned to get “Mary on the Green”.

The everywoman idea is in itself problematic, harking back to the idealised, objectified nudes of the past, those hollow symbols of femininity that for so long represented the containment and subjugation of women.

No wonder spectators are confused, wondering why she has been represented with a figure so small and naked, not to mention so slim and conventionally attractive. And the “everywoman” idea is in itself problematic, harking back to the idealised, objectified nudes of the past, those hollow symbols of femininity that for so long represented the containment and subjugation of women. Can you tell that I hate it?

It seems a fitting end to a year in which the politics of public art have been everywhere. In summer, there were the demonstrations in support of Black Lives Matter, which included the tearing down of Bristol’s monument to the slaver Edward Colston, followed by the sanctioned removal of a statue of slave trader Robert Milligan from outside the Museum of London Docklands.

Other statues, such as one commemorating Winston Churchill, were vandalised, and in the US debate swirled around toppled public monuments to Christopher Columbus and confederate generals. Prior to that, campaigner Caroline Criado Perez had been drawing attention to the depressing lack of female representation in statuary as part of her successful campaign for a monument to Millicent Fawcett, another feminist icon, to be erected in parliament square.

These works do need to capture something of the spirit of the figure to whom they pay tribute, while doing justice to their legacy.

The result, created by Gillian Wearing, provoked a great surge of joy in me. I don’t know if it is the banner that she is carrying - “Courage calls to courage everywhere” it proclaims, perfectly encapsulating women’s long, hard struggle - or the parents I saw introducing this inspirational figure to their children. But the significance of this work felt monumental, while the Hambling sculpture just makes me feel depressed. Fawcett did much to defend Wollstonecraft’s legacy, and I doubt she would have liked the latter’s monument much, either. Certainly, none of us expected to find ourselves contemplating whether or not she had a full bush.

I am not saying that monuments to great women always need to be conventional or stick to the norms of heroic stances on plinths to be considered good art. They don’t even need to be figurative; rather, they can be as inventive or as groundbreaking as the artist desires. But such works do need to capture something of the spirit of the figure to whom they pay tribute, while doing justice to their legacy. It is hard to imagine a male writer or thinker being “honoured” by a sculpture of a tiny naked man, schlong out for all to see, ripped like a Ken doll, emerging from a mass of what we are told is “organic matter”. It is a huge missed opportunity.

The recent debate around statues and public art demonstrates how strongly we feel about it, especially when we feel that an artist has got it wrong.

I call it the 'It’s a naked lady, so it must be art' syndrome.

Marc Quinn’s temporary statue of BLM protester Jen Reid in Bristol, placed on the plinth where Colston’s monument had once stood, divided the art world and was called a “votive statue to appropriation” by artist Thomas J Price (I saw his point, while appreciating the situationism inherent in the stunt). A statue by Luciano Garbati of a nude Medusa in New York had for too long got away with being hailed as feminist simply because it represented a reversal: Medusa is clutching the decapitated head of Perseus. Pleasingly, critic Jerry Saltz wrote that it was “pure crapola” adding: “This sculpture is dead, optically inert, intellectually barren.”

Medusa is shown as a slender, toned, idealised figure, suggesting her creator suffers from the same problem as Hambling: a lack of creativity, a consequent falling back on the visual symbols that we are told epitomise great art (perky breasts) with the false belief that fidelity to those conventions will prevent anyone from pointing out their banality. I call it the “It’s a naked lady, so it must be art” syndrome.

There’s a sort of bland corporateness to these female figures. As Saltz notes, public art is hard to do well, with the exception of artists such as Kara Walker, creator of the giant fountain full of slave trade references at the Tate Modern last year. It sounds harsh, but there’s a soullessness to much of it. Is it the reliance on big names? A failure to commission diversely? A lack of original thought? An attempt to please everyone and therefore ultimately and blandly, no one? I suspect all of these, and more.

It’s a shame, because the campaigners have worked admirably and honourably, but I do wonder what on earth they were thinking. It goes to show that a woman artist won’t always do a female subject justice, and just how much of a hold the naked, idealised female form continues to have on our ways of thinking about art.