It’s a small gesture that can mean a lot. It can also contribute to your family history 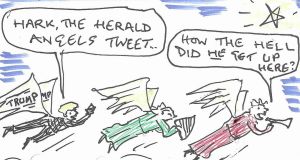 Is the practice of sending Christmas cards diminishing? My own, output and input, have dropped considerably in the past few years. Digital, text messages and greetings on different forms of social media and donations to charities have taken over.

But nothing beats a personalised card. It takes time and effort and shows that you have taken a few moments to think of the recipient. It’s a small gesture but it can mean a lot. And if you keep them, they can be informative and offer an insight into your family history.

In 1918 my grandparents, Mick and Julia Dowling, left Dublin to go to London. After a while they managed to rent a three-storey dwelling and set up a boarding house. They advertised for lodgers in the Wolfe Tone Weekly, the republican newspaper. That is how they met George Plant, from Tipperary. He stayed with them often, became a friend, and brought the Mackay sisters to stay too – he later married Mary Mackay. The closeness of the friendship is evident when my mother spent Christmas 1937 with the Mackay family in Mooncoin. She said it was the best Christmas she ever had.

I have tried to find out why George Plant paid so many visits to London at that time. Although there is no historical evidence, it seems possible that it was connected with the Republican activities that preceded the bombing campaign in England during the second World War. This campaign was organised by the chief of staff of the IRA, Sean Russell, with whom Plant was very close. It was a very difficult time for De Valera who had publicly broken with the IRA and was determined to preserve Irish neutrality.

George Plant was a very active Republican and had become an anathema to De Valera. So when he was accused of the murder of a suspected informer, Michael Devereaux (which later proved to be untrue), all the power of the State was used to find Plant guilty. He was tried and acquitted, but the law was changed and a military court found him guilty. He was executed in 1942 in Portlaoise prison.

The Christmas card was sent to my grandmother from Arbour Hill, just three months before his death. Her friendship with George Plant coloured her politics. She had been a supporter of De Valera but later became left wing and an activist in Republican prisoners’ rights. She never voted for Fianna Fáil again.

Gerard Dillon was a self-taught artist from the Falls Road, in Belfast. My parents met him when he was in London in the 1950s. He was painting full-time but finding it difficult to earn a living

My father, the late Donal Foley, with the journalist Wesley Boyd, organised an exhibition for him and his fellow Belfast artist George Campbell at the Irish Club in Eaton Square, and it sold well.

George had been in art school and had been involved in setting up the Progressive Painters Group in Belfast of which Gerard Dillon became a member.

As well as painting they enjoyed traditional singing and music. George was an accomplished guitarist. During this time in London they took part in the recording of an LP by Ottilie Patterson from Comber, Co Down. She was a blues singer, married to band leader Chris Barber. Ottilie’s Irish Night features George playing The Stack of Barley and Gerard sings The Colleen Dhas (stet) and I Know My Love.

My father and Wesley can be heard giving vocal support in the background!

Both Gerard and George sent my parents Christmas cards every year. They were duly framed and had pride of place in our home. My parents and the artists would be amazed to discover that these cards now fetch high prices in art auctions.

When Maeve Binchy married Gordon Snell and brought him to live in Ireland, he very quickly became familiar with life here and Irish culture. Under my father’s tutelage he came to love hurling and rarely missed a Munster final. He championed the Merriman summer school – and even learned set dancing.

A writer of childrens’ books, he is also a talented illustrator. He brought these skills together and sent his friends Christmas cards every year depicting the politics of the day and events in their lives. My mother had a collection that spanned 34 years. She carefully kept them together in an album and it now gives her grandchildren an insight into her life and interests.

I am hoping that my two artist friends will keep me on their Christmas card list so that I, in my turn, can pass on a small record of my life and the times we live in.

When I told Brigid O’Brien that I was hosting my first family Christmas, she sketched this card and she wasn’t far wrong in her depiction – it was chaotic! Brigid also uses art to highlight social issues. She curated an exhibition some time ago in Bray called “No Fixed Abode” to raise awareness of homelessness.

Mick Kuntz – a pupil of the late Yann Goulet – and an organic farmer in Kilcoole, brings a cartoon style to all his work. He is an illustrator – working on historical comics. This card is more reminiscent of Christmas activities of former years and is unlikely to be repeated for most of us this year!

So get out the paint box and send a card!