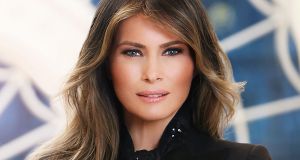 Every Eye Is on Me: Melania Trump by Régine Mahaux-Van Wassenhove. Photograph, 2017 (printed 2020). The White House

Bess Truman, who was first lady of the United States from 1945 until 1953, has not become the sort of historical figure people quote on Instagram. “A woman’s public role is to sit beside her husband, be silent, and be sure her hat is on straight,” she said, even though, behind the scenes, she was nicknamed “the Boss” and wrote many of President Truman’s speeches.

Such anecdotes permeate Every Eye Is upon Me, a virtual exhibition of first-lady portraiture at the National Portrait Gallery in Washington, DC, which tracks the development of the role since the early 19th century. The portraits, which range from Martha Washington’s detached stare and frilled bonnet to Melania Trump’s soft-focus smise, aim to examine “the way these women were framed”. The show is also part of an effort “to help rectify the absences of women in US history”, according to its curator, Gwendolyn DuBois Shaw.

I was struck by how many of these women were smarter than their husbands but, because of women’s secondary position, had to attach themselves to a man who could take them where they wanted to go

Ideally, we would be talking about first spouses, of course, but so far, alas, the US president has always been a man, with a first lady beside him. The position was born of what we might now describe as emotional labour, too. In the early 19th century, says DuBois Shaw, “propriety dictated that a woman be present, as a hostess, if it was a mixed gathering of people”. If no wife was available first daughters, and first female friends were roped in.

These early first ladies were often very ambitious. “I was struck by how many of these women were smarter than their husbands,” says DuBois Shaw, “but, because of women’s secondary position, had to attach themselves to a man who could take them where they wanted to go.” Mary Lincoln, for example, “was very interested in politics. But she can’t run so she finds a guy who also wants to go places and tries to partner with him.” This was no easy ride, of course. Being opinionated and outspoken, says DuBois Shaw “she was constantly thwarted by sexism. She develops a reputation as being a difficult woman.”

The question of whether the first lady should verbalise her opinions has reverberated through the ages. Eleanor Roosevelt, for example, had a newspaper column and a weekly radio address and published more than 40 books. Her portrait, in which she is theatrically lit like a screwball heroine, and symbolically holds a pencil, brings this to life. She was “an amazing writer, a woman who found her voice in middle age, and was very active, travelling places her husband couldn’t after contracting polio”, says DuBois Shaw. As a tireless social-justice activist, often expressing more radical political views than her husband, her outspokenness made her a polarising figure.

If Eleanor Roosevelt represents the years, during her tenure of 1933 until 1945, when many women’s lives changed dramatically as they entered the workforce as part of the war effort, Mamie Eisenhower’s portrait expresses a thousand words about the 1950s backlash.

In a candyfloss-coloured dress with matching opera gloves and a clutch bag, Mrs Eisenhower “is an example of the homemaker in chief”, says DuBois Shaw. “She is all about wearing the Dior new look, with cinched waists and full skirts, and putting pink doilies all over the White House. She is kind of a regressive antidote to the liberated work-empowered women that had come out of the war years; it’s a way to get women back in the kitchen. She models that for working-class and middle-class white women. A shade called Mamie pink became really popular in fashion in the 1950s.”

All the portraits illustrate something unique about each of the sitters and their approach to the role. Jacqueline Kennedy’s Time magazine cover, for example, speaks of the growing prominence of the role as a political celebrity. She stands in front of the White House portico, with a baby’s pram on the balcony. “It’s a really poignant image because it speaks to the young family she brought to the White House. She is the future.” It also foreshadows the unimaginable tragedy she would soon face when her third baby died two days after he was born, just months before her husband was assassinated.

Betty Ford’s steadfast bouffant, meanwhile, is represented in oils. During the course of her research, DuBois Shaw says Ford became “my new favourite”. During her time as first lady, she spoke openly about many taboo issues, notably breast cancer and mastectomy. After leaving the White House, she talked about her addiction to prescription painkillers and alcohol, and then memorably launched the Betty Ford clinic. “She initiated a national acceptance of addiction as a disease that is treatable, not shameful, not a moral failing,” says DuBois Shaw. “We have Betty Ford to thank for that.”

But while many first ladies have achieved extraordinary things, within the confines of this unpaid and unelected role, many more have been unsure how to use their power and prominence. Even Martha Washington, says DuBois Shaw, had a “complicated” relationship with the position. “She was very unhappy about being put into this role, because it confined her; she complained to her friends in letters that she hadn’t been able to go anywhere or do anything since her husband had been president.”

This was before the role was, to some extent, regularised by Edith Roosevelt, who established offices in the East Wing and hired a social secretary in 1902. Over the ensuing decades, a retinue of staff sprung up, “helping the first lady to meet the expectations of the public”. Still, over 250 years, there is no satisfactory answer to the question of exactly what a first lady should be. And perhaps that is appropriate: until there are more women in office, and there are routinely first gentlemen too, the role of first lady, and its assumed continuation of a gendered division of power, must remain uncomfortable.

Uncomfortable is certainly the sense you get from Melania Trump, who publicly wears the perma-peeved expression of a person stuck in a gilded cage with an orange narcissist. A secret recording of her frustrations with the role was recently leaked, in which she complained about the public perception of her as “complicit” in her husband’s cruel immigration policies and the thankless months she had spent on the White House’s festive decorations with the immortal line: “Who gives a f*** about Christmas stuff?”

At least later first ladies have had the chance to create their own images. Since 2006, first-lady portraits have been actively commissioned by the US National Portrait Gallery, along with its long-running collection of presidential portraits. Hillary Clinton was the first, captured in profile, by Ginny Stanford, looking composed and regal, like the head of a coin, flanked by gold-leaf panels, and wearing a hopeful shade of buttercup yellow. It is a rather poignant image, given what happened later, of which, DuBois Shaw believes, the role of first lady played its part. “Much of the animosity towards her begins when she does not inhabit that role of first lady in the way that the sexist powers-that-be would have it.”

Michelle Obama’s 2018 portrait, by Amy Sherald, reflects her openness and interest in contemporary art as well as her understanding of the power of her endorsements. Sherald and Kehinde Wiley, who painted Barack Obama’s portrait around at the same time, were the first black recipients of commissions from the National Portrait Gallery. There was some controversy when the portrait was released because Obama’s skin was represented in greyscale, which Sherald has used, she has said, “to exclude the idea of colour as race”. Obama was open to working with an artist with her own very strong ideas about how the finished portrait would look, says DuBois Shaw. The dress she wears, designed by Michelle Smith, was also thoughtfully chosen. Its patterns are reminiscent of “patterns and designs commonly found in American quilting, particularly African American quilting traditions, and references the history of women’s needlework and American folk art, and that was something Mrs Obama was drawn to,” says DuBois Shaw.

It will be the Trumps’ turn to be captured next for their exit portraits if, please God, they concede and vacate office (a process on which, sadly, DuBois Shaw would not comment). Until then, the White House provided Mrs Trump’s official photograph, for the exhibition. The current first lady’s razor-sharp jawline, tonged hair and HD eyebrows present a level of grooming that would have been alien to first ladies of yore. It is a highly structured portrait. “Mrs Trump was a model, so she really understands the camera and knows exactly how she wants to look. I think it reflects the desire she may have had – going into the White House back in 2017 – to present a composed and straightforward image of herself,” says DuBois Shaw.

Given that Mrs Trump has played close to a nonspeaking role over the past four years, the choices she makes for her official portrait, when it is released, will be worth a thousand words, and everyone will be listening. – Guardian