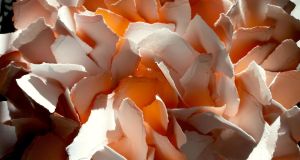 What is it? Light Painting, Orange is a mixed media work by Catherine Owens.

How was it done? Owens uses collage to create three-dimensional surfaces that are sculpted by light – the LED lighting she uses is part of the work, as is an audio track. She aims to convey the – optimistic? – light of dawn breaking, and the sounds are drawn from the dawn chorus. Masses of torn, reverse-painted paper “petals” are attached to milled oak frames. Wirelessly controlled LED lights are housed within the frames and can be left at a constant level or modulated through programming.

Where can I see it? The work is included in 6am, Owens’s current exhibition at the Oliver Sears Gallery, Dublin. It is one of 19 paintings on view, together with two site-specific drawings.

Is it a typical work by the artist? Owens has made works distinct from but closely related to her Light Paintings, notably Sliver, a fine series of painted triptychs, stacked colour bands inlaid with LED lighting and incorporating soundscapes – comprising birdsong, music by Donnacha Dennehy and conversations between the artist and a friend. The impetus for Sliver and the Light Paintings was the emigrant/immigrant experience. Owens moved to the United States in the mid-1980s and was from then on acutely aware of being in a space and place different from home.

As regards typical, it must be said that Owens is definitely not an artist who looked for a signature style and then settled into it. Rather, she is a restless spirit who moves across disciplines and media. Central to her creative evolution is a remarkable period from 1992 to 2010 during which she was responsible for the visual content, encompassing animation, film and video, for five U2 world tours.

She also directed an acclaimed digital 3D film, U23D, for Imax release. Additional music-related projects include work with the Kronos Quartet and Chinese musician Wu Man. Other 3D film projects are a documentary on Kumbh Mela, the vast, once-in-12-years spiritual gathering in India, and a documentary on Irish dancer Colin Dunne, Sculpting Space.

Her association with U2 goes back to her college days in the 1970s – a daughter of advertising maestro Peter Owens (who had worked in Madison Avenue in New York before returning to Ireland and cutting a swathe through Irish advertising), she studied art in Belfast, having played guitar in “a girl band”. Her first involvement with U2 was a set of three murals framing the rehearsal space for The Unforgettable Fire. She had moved to New York when she got a call about painting some Trabants for Zoo TV. The scale and ambition grew from there. Several artists – David Wojnarowicz and Brian Eno included – were involved at various stages but Owens became co-coordinator and guided the concepts attached to each project.

While based in New York, she relishes time at her studio in the Blackwater Valley in Co Waterford, overlooking the river between Lismore and Fermoy – “a majestic landscape tumbling towards infinity”.