Damien Hirst’s giant uterus? It should shock us out of ignorance 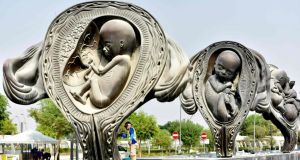 As a child, I remember asking my mum where babies came from. Whatever she said left me with the distinct impression that it involved her eating some sort of magic egg. Later, after my sister was born, I drew a picture of a woman in a delightfully patterned dress, beaming as a baby popped down from between her legs. The “labour” of labour had clearly not been made known to me. The whole affair was shrouded in mystery.

In my 14 years in the education system I learned scarcely more of the female anatomy. It’s only with the arrival of apps such as Hormone Horoscope that I have finally managed to fathom what that mystical “cycle” really means. And what a revelation it was to discover that what we refer to as the vagina is actually the vulva!

It doesn’t help that the most iconic pregnant woman is the Virgin Mary, and we very rarely get a glimpse of her with a rounded belly. Usually she is glistening atop an altar with a golden halo, arms encasing her newly birthed Son of God. Even in The Visitation by Jacques Daret, one of the most famous depictions of Mary while pregnant, the only clue that she is with child is Elizabeth’s hand resting on her stomach. In Daret’s Nativity scene Jesus lies glowing on the floor, as Mary looks down serenely. The moments between life inside and outside of the womb are nowhere to be seen.

Aside from Leonardo da Vinci’s studies of the foetus in the womb, most artistic depictions of pregnancy focus on an expressionless face and a hand caressing a perfectly rounded bump. In Gustav Klimt’s Hope, II the subject looks calmly at her enlarged stomach, her hand travelling to that natural resting point. These hands over pregnant stomachs are both protective and secretive, as if they are guarding their baby as well as the process of growing a child and giving birth to it.

It’s with open arms that I welcome Damien Hirst’s The Miraculous Journey, 14 bronze sculptures that depict in vivid detail the gestation period, ending with a newborn. The structures, which range from 5m 11m tall, document the fertilisation of an egg, a twin pregnancy, a breech birth and a foetus. There are no hiding hands and blank faces here: the wonder of the creation of life is on display for all to see.

And on display, no less, outside Qatar’s Sidra Medicine hospital, a facility for women and children. Hirst told Doha News it is “the first naked sculpture in the Middle East… It’s very brave.” They have been termed “controversial”, and there has been speculation that the reason they were covered after their original unveiling, in 2013, was due not to construction work but because of outrage on social media.

I can’t think of anything less controversial. Every single person on the planet has been born – a point that Sheikha al-Mayassa bint Hamad bin Khalifa al-Thani, chairwoman of the Qatar Museums Authority, who commissioned the work, made when speaking to the New York Times: “To have something like this is less daring than having a lot of nudity. There is a verse in the Koran about the miracle of birth. It is not against our culture or our religion.”

The Miraculous Journey is about “the miracle of birth” and about the wonder of the female body. We need to stop shrouding women’s bodies under mysterious facial expressions and myths that risk confusion about how childbirth works. Over the years Hirst has done much to lift this veil, especially in the triumphant Verity, whose hand doesn’t rest on her pregnant stomach but holds a sword high above her head.

Next time children ask where their new siblings came from, their parents can look out of the window of Sidra Medicine hospital and show them. And we can step further away from magic eggs and storks. – Guardian