A matter of taste: when art and food collide

Food is central to our lives, so how do artists engage with its symbolism and meaning? 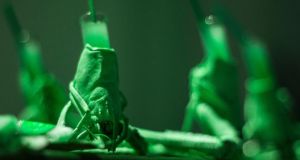 A matter of taste: prawn-head smoothies in a Domestic Godless installation

Ten years ago, when Radisson launched a new hotel on Golden Lane in Dublin, the centrepiece of the opening was the opportunity to go “sky dining”. Strapped into seats around a metal table, we were hoisted 30m into the air by a crane. Suspended over the city, we were served champagne in plastic flutes, and bland canapes. Mildly thrilled by the experience, I couldn’t help feeling it was also a perfect metaphor for, and indictment of, a culture crazed with excess.

Back in 2008 the crash was looming, but Lehmann Brothers wasn’t to collapse for another few months. To a throng who couldn’t imagine hunger and want, who could barely imagine the experience of wanting to want anything, the quest to titivate jaded palates seemed never ending.

Food is deeply symbolic. Witness the bread and wine in Christian doctrine. No wonder artists are fascinated

Hunting becomes the pursuit of the new, whether a restaurant, recipe or food regime. Recipes themselves evolved from the need to mask the taste of ingredients past their freshness, and processes such as curing and fermenting were for storage through the long winter. Beyond the satisfaction of hunger, there has always been an element of performance to food, its production and consumption. Altering raw ingredients is a culture that is as old as culture itself.

Food is also deeply symbolic. Witness the bread and wine in Christian doctrine. No wonder artists are fascinated. But as food moves on to the menus at arts festivals, such as with Cork Midsummer’s Long Table event, in which 420 diners sit down for an open-air meal on the city’s South Mall, what exactly is going on?

Elsewhere, the Vortex performance centre in Texas laid on a Salvador Dalí-inspired fundraiser feast last month; back in 2011 the performance artist Marina Abramovic sparked a controversy when she designed a fundraising dinner for Los Angeles Museum of Contemporary Art that included a naked human centrepiece (not Abramovic herself) at the top table, plus some startling “human cake” that Debbie Harry, the Blondie singer, began to cut up. Performers were to be paid $150 for taking part in An Artist’s Life Manifesto; tickets for the event cost from $2,500 to $10,000. The museum was accused of using artists to exoticise the act of eating – co-opting them to create a more arty version of the sky-dining thrill.

Meanwhile, although it takes place in the context of an arts festival, the Long Table is a dining event, put together with a group of chefs. A foodie experience rather than an artwork. Artists who work with food are aiming for something more. The Domestic Godless is made up of the artists Stephen Brandes, Irene Murphy and Mick O’Shea. Playing with ideas of taste, and the notion of having “good taste”, their recipes include Japanese-knotweed mousse cake, hot-dog ice cream and sea-lettuce vodka.

Their projects and events are an answer to anyone who has ever felt that food today (especially fine dining, TV chefs and out-there recipe books) has taken things too far. It’s definitely witty, but there is a more serious side, as Brandes explains. “Food offers us a formidable amount of potential, simply because we all eat. It traverses all areas of human interaction,” he says. “It can manifest love, hospitality, disgust, fear, social class and national identity. It can spark fierce political debate.”

What makes Luncheonette an art practice rather than a cafe run by a former artist? ‘I still imagine that this is my studio. It’s just maybe 500 people come here every day’

The true politics of food go beyond the middle-class obsession with authenticity, and artisanal heritage grains, to reach into deeper issues of cash crops and protectionist policies that see foodstuffs warehoused to the point of decay in some places and to the point of starvation in others. On a different level again, ideas of food chauvinism see food used as a cultural divider, with the food of some seen as high culture, and others marginalised as charmingly “ethnic”. Brandes agrees. “Food also embodies social values. Mix these together,” he says, “and the capacity for irreverent and creative invention is fathomless.”

Jennie Moran studied sculpture at the National College of Art and Design, in Dublin. After graduating, her work focused on ways to make certain spaces within our cities more hospitable (and, in some cases, more dangerous). Using elements borrowed from hospitality – chairs, lighting and food – soon led to focusing on the food itself. “I loved the way food made people gather and loiter,” she says. “It makes people spend time in a place without wondering what they’re doing there.” Dismayed that NCAD was about to close its canteen, Moran began to make food for the college one day a week.

“It was a weird interruption of my practice, but it ended up with me getting the keys to the space.” Now Moran’s Luncheonette welcomes art students, locals and those working in the area. But what makes it an art practice rather than a cafe run by a former artist? “I still imagine that this is my studio. It’s just maybe 500 people come here every day. It’s everything I was trying to do in my art practice, using food as a way to activate a space, create conversations, and nurture.”

Luncheonette also leads to other projects, such as the Local Group’s Foyle Punt, which took place at the Cairde and Earagail Arts Festivals this summer. The piece centred on the lives of Philip and Brian McDonald, the last of six generations to build Foyle punts in Donegal. “Roise Goan got in touch with me to provide some kind of hospitality, and in the end I had a performative role. I’m this character in the background, using the boat-building tools to make food. So it’s disruptive, but it’s also about moving on.”

Another project saw Moran collaborating with a group through the Dublin City Council Culture Connects programme, to explore Dublin’s food histories and stories, and through them the stories of the city itself, resulting in the book Around the Table.

Currently based in Brussels, the Irish artist Fiona Hallinan is also working on a residency in the Grazer Kunstverein in Austria. There she has set up a “cafe” space called Fink’s – “It would be a bit like having a bar called O’Neill’s in Ireland,” she explains – from which she responds to the arts centre’s programme. “I started working with food because a lot of the projects I was doing required a moment of encounter between people,” she says. “The first was in 2012. Airbnb wasn’t that popular yet, but hospitality and the sharing economy had become real. It was offering opportunities to people to open up their lives, but it was also comodifying something people do anyway.”

Hallinan created a feast, which she found was a powerful way to bring people together. Further projects followed, including the Hare Cafe at the Temple Bar Gallery in 2013. Working with the chef Katie Sanderson, the cafe was named for a ship that had brought food from Britain to the striking workers during the 1913 Lockout. In Graz, Hallinan makes aromatic powders, based on the arts centre’s seasonal programming, and her conversations with visiting artists. Visitors are invited to take home a sample of each season’s powder.

“There’s a lot of interest in the idea of the food itself being an artwork,” Hallinan says. “But that’s not the part I’m interested in. I love to cook, and there are certain ways in which I have a position – seasonality, for example – but it’s the activity and the process of doing things, and the communality that interest me.”

Exploring food production has led the Dublin- and Vienna-based artist John Gerrard into a different territory. In 2009 he created an exquisite dinner, cooked by Slow Food Venice, on the island of Certosa at the Venice Biennale. This was in counterpoint to the exhibition of a series of the artist’s large-scale signature 3D real-time projections. Grow Finish Unit depicts the soullessness of an automated pig-processing plant in Oklahoma.

Gerrard says the Grow Finish Unit works are part of a continuum, which started in 2007, with his Dust Storm works, that explore the ravages of ill-considered methods of farming. From these he moved on to discover the apocalyptically hideous automated pig farms isolated on the American Great Plains. Sow Farm (near Libbey, Oklahoma), 2009 was purchased by Tate. “It’s about our relationship to food,” Gerrard says. “But it’s also about consumption.”

Gerrard’s most recent work looks at a different kind of farm: Google’s data centres. “It looks like a pig-production farm,” the artist says. “And it’s a farm that provides services, but it also consumes customers. It’s about a different kind of consumption. Humans are consuming data, constantly; always on their phones, consuming data in an almost psychotic way and, at the same time, being consumed by it.”

Artists may be co-opted on occasion to add exotic sparkle to excite tired palates. But look more closely at what they’re really doing, and saying, to get a taste of a new way of thinking about, and being in, the world.

The Domestic Godless cookbook, The Food, the Bad & the Ugly is available at the Royal Hibernian Academy, in Dublin, and to order online at thedomesticgodless.com (€25). Around the Table is available as a free download from dublinscultureconnects.ie

Brian Moore: ‘There are those who must flee Ireland to see Ireland plain’
10