In his multifarious work the artist considers his own role in modes of production: industrial, artistic, intellectual 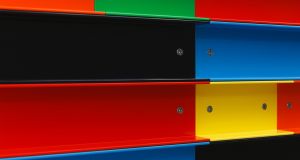 What is it? Liability Channelled is wall-mounted sculptural work by Liam Gillick.

How was it done? Gillick has long used “secondary forms” in his abstract works. That is, the component materials that “support or disguise architectural structures” – especially, one feels, conspicuously opulent new architecture. Industrial elements are arranged according to his designs. Not surprisingly, he has designed and located examples of such works in architectural settings, where they are effectively both art and design at the same time. Here, bolted aluminium beams are powder-coated in bright colours – primaries, black and green – and arranged in a geometric pattern. The process is industrial, the aesthetic is playful, though the artist might – and indeed does – argue that in so foregrounding the functional components and processes he is implicitly framing a critique of, to borrow a phrase from Fredric Jameson, the cultural logic of late capitalism. Still, the colours are nice.

Where can I see it? Liability Channelled is included in Gillick’s exhibition, A Depicted Horse is Not a Critique of a Horse, at the Kerlin Gallery (Anne’s Lane, South Anne Street, Dublin) until January 19th. kerlingallery.com

Is it a typical work by the artist? A tricky question in relation to Gillick, who is famously unpredictable, but it is actually typical, while allowing that it is but one strand among the many and varied that comprise his oeuvre.

Born in Aylesbury, England (and now based in New York), he studied at Goldsmiths and was one of the first crop of YBAs, though for some reason he did not take part in Damien Hirst’s trend-setting 1988 exhibition Freeze, which put the group on the map. That is perhaps appropriate given that Gillick is more commonly associated with relational aesthetics, or relational art. He was included in Nicolas Bourriaud’s 1996 exhibition Traffic, which introduced the term. Bourriaud’s proposition is that art pivots on experienced encounters between all those involved, not on the evocation of histories or theories outside of the communal event. Among artists associated with the term, there has been a trend towards a looser, less prescriptive definition, while remaining close to the central idea.

Gillick draws on a bewildering range of sources and references, but has a consistent underlying interest in cultural production in its widest sense (and how the category of artist, and he, fits into the picture). His Kerlin show juxtaposes a series of abstract aluminium pieces, dubbed “channel works”, together with a set of enlarged medieval woodcuts bearing anachronistic additions in the form of captions and images, commenting on modes of production. A monk in a scriptorium anticipates the production line of the future with the exclamation “Volvo!” Similarly, a winemaker in a cellar holds a cup aloft and thinks “Fiat Strada!” St Sebastian, riddled with arrows and other missiles, muses on “Return on capital employed…” A knight on horseback imagines an abstract geometric composition. Gillick has noted the “play between activity and analysis” in his work, and this lively, conversational play, even charm, reflects his articulate, loquacious personality.

TV guide: 24 of the best shows to watch this week