Twilight zones: finding a way home through the half-light 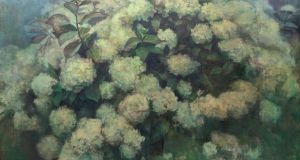 Maeve McCarthy, In the garden, oil on linen, Molesworth Gallery

Back to the Garden – Maeve McCarthy RHA

Maeve McCarthy’s paintings in Back to the Garden are not entirely given over to the garden, though it features large, in a haunted, misty, mysterious way: masses of lush hydrangea blossoms looming out of the damp foggy night, trees against the sky, massed borders of perennials in shade. The first painting in the exhibition is called Abandoned Village, a cluster of low buildings in the distance, again by night – night and twilight are the abiding times throughout all of the work. It’s interesting that the largest pieces in the show, by far, are the close-up, compressed views of blossom in the containment of the garden, while more expansive views, even those evoking immense spaces, are small in scale.

The effect is akin to long shot and close-up, cinematically (McCarthy worked in film animation for a while, and she has made at least one video closely related to her painting), with the close-ups drawing us, even compelling us, into inner, psychological spaces.

The accompanying gallery note puts the work in context, sketching a background story that is something like this: McCarthy is saying goodbye to Brandon, Co Kerry, where she lived for a time. Perhaps it is the abandoned village mentioned. Both her parents died during this period. She returned for a while to her family home, in Glenageary, Co Dublin – a common enough experience, and one with all the strangeness of revisiting a familiar world that has lost its familiar people.

She will be moving on from Glenageary in the not-too-distant future. All of this experience, reflection and anticipation is distilled in the paintings, which are very quiet and still. They express both a state of being detached, at one remove, even a restlessness, but also a profound emotional resonance, and perhaps a desire for home and belonging; varieties of prospect and refuge, in a way.

The houses we see, handsome terrace dwellings, illuminated in the darkness by the glow of electric light, are inviting, but they also appear vacant, undercutting their welcome, and perfectly embodying the ambivalent, paradoxical inclination to maybe settle – or just to move on.

Pictorially, McCarthy’s viewpoint, and hence ours, is that of an outside observer. Well known as a portrait painter, here she opts not to depict people, but her paintings are clearly about people, about life, and we can easily relate to them via our own experiences. A technically accomplished artist, she favours technique that does not advertise itself, and in this body of work it certainly doesn’t. She sets herself many challenges and more than meets them, all without being showy. But take a moment to consider how well these paintings are made and you will appreciate the exceptional level of her achievement.

Mark Swords’s Lost Highway Guy follows on from his epic show at Temple Bar Gallery in 2017, The Living and the Dead. It has a similarly encyclopedic ambition, though in a different way. Where the Temple Bar work had at its heart the notion of the city as a vast organic structure, a congeries of the lives lived within its precincts, past, present and future, its multiple layers and networks and oddities, delights and disparities, the new body of work – precisely five paintings – pick up on one central strand: the artist’s own experience of the city, especially the daily routine, from home to studio.

Swords’s eloquently elliptical text on his new work finds him in the studio. It’s late in the evening. He’s completed the five paintings, but he’s wondering how they, and the time, energy and attention he’s put into them, fit into the scheme of things. “I should be somewhere else, helping someone else. Nothing here could be as important as that.” He wonders about the inevitable element of selfishness involved in making art: “I let myself make this work,” he reflects, as though it is a kind of indulgence. Collectively, the paintings reflect his “thoughts . . . obsessions and . . . anxieties.”

On the other hand, there is also a generosity in his approach: “I tried to allow everything into the paintings – from the big questions to the incidental, the accidental.” It’s a good account of why they appear as they do. Swords has generally placed an emphasis on the making involved in his work, not just in that he often uses string, tacks and tape to hold things together, but drawing on a range of practices involving manual craft skills and artifacts, from carpentry to weaving, sewing, patchwork, mosaic and collage.

The latter two are especially pertinent to his approach.That is, his Lost Highway Guy paintings incorporate elements of collage, but also, figuratively speaking, the term collage corresponds to his promiscuous accommodation of many different kinds of signs, images, patterns, not to mention song titles. He really does have an open door policy when it comes to what is allowed in, and an instinct for organising it all in ways that are never obvious but always visually stimulating. His use of colour is highly individual, sometimes sparing, sometimes hectic, to the extent that it shouldn’t really work. But it always does.

There, in the studio, he “must somehow use this time, make it count”. To be in that position, in the midst of life with its myriad concerns and obligations, memories and hopes, and yet momentarily apart from it, on a lost highway, engenders responsibilities.

Bad Boys for Life review: The funny bits are funny. The serious bits are even funnier
6

150m Shades of Grey: How the bestsellers changed our sex lives
8