Review: John Behan at the Solomon and Marion McKeever at the Assembly House 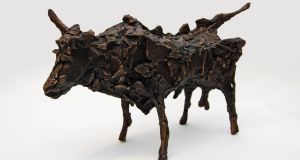 John Behan’s “The Bull of Easter II”: “an ingenious amalgam of biology and technology” 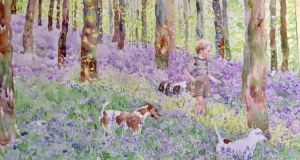 A watercolour by Marion McKeever: “a coherent sense of a rural world”

He may be in his late 70s, but John Behan, recognised as one of Ireland’s leading sculptors for nearly five decades, still seems comfortably at home in the physical, labour-intensive world of cast and fabricated metal sculpture.

Past and Present is quite a densely populated show. It does not feel crowded but there is plenty of work, all of it distinctively individual and, from the maker’s point of view, exacting. No shortcuts are taken. Behan gives each piece whatever it demands, which is usually a lot.

Behan was a metal worker by day and an NCAD student by night, so his work ethic runs deep. What he learned industrially was easily as useful, if not more useful, than academic input.

Even as he was finding his voice as an artist, he was fabricating the cultural structures and infrastructure that he and his contemporaries might inhabit and use, and preparing the way for future generations. Behan cofounded Project Arts Centre and the Dublin Art Foundry.

Several characteristic themes and motifs are revisited: the bull, a flight of swans, a famine ship, the image of a host of like-minded individuals banded in solidarity. The thematic underpinning of the show relates to 1916, and the band, the host of individuals, in Easter 1916 numbers 16, a melancholy grouping: presumably, as Adrian Frazier notes, those facing death in Kilmainham Gaol. There is also a group of Cumann na mBan.

One of the innovations prompted by the Rising was the armoured car, and several of the rough-hewn improvisations employed are reimagined in a series, War Chariots. There is also an expressive Roger Casement.

Behan does not lazily reprise any motif. The Behan bull becomes The Bull of Easter (a sacrificial bull, Frazier suggests), and these incarnations of a staple are extremely convincing.

In tune with current debates and prophesies about artificial intelligence, the bulls are ingenious amalgams of biology and technology – and, to be fair to him, Behan was doing that well before AI became a real talking point. It’s a good way of conveying the frightening mechanical, physical power of the beast. The swans are The Wild Swans at Coole and there are several fine incarnations of them, including one with a white patina.

Famine ships are another recurring subject; there are several exceptional treatments here. They are eloquent, worthy reminders of an unimaginably devastating chapter in Irish history. Oarsmen working in unison are a more optimistic evocation of our relationship to the sea.

Do we learn more of John Behan from this show? Possibly so. His best work is thematic. When he becomes minutely involved in telling a specific story, the work can become too grounded in incidental detail, and perhaps too schematic, although his homage to Brian Friel in Death of a Dramatist is specific and effective.

McKeever, who has been a consistent exhibitor with the Irish Watercolour Society, now has a solo show. About 40 works are displayed in a single room and arranged in tiers, as paintings traditionally are in academic group shows. It goes against the generally minimalist grain of contemporary gallery hanging, but it can work, and does in this case.

The artist studied at NCAD and lives and works on a farm in Co Louth. As a precursor, the great watercolourist Mildred Anne Butler comes to mind. McKeever’s subject matter is, quite simply, the world around her. That includes many kinds of animal, especially geese and goslings, cows and calves, hens, sheep and lambs – and a whippet. She has a real feeling for animals, and also makes very fine botanical studies.

No matter what she is addressing, she is a close, meticulous observer. This is a great strength, especially as her attentiveness extends to the whole composition in each case. The dappled fall of light across a scene is beautifully captured.

It would be easy to categorise McKeever’s work as nostalgic in evoking a pastoral idyll ,but that would be quite unfair. There is an idyllic quality for sure, but it emerges from the subject and not from an attitude she projects onto the subject.

For example, on the whole McKeever doesn’t go in for the anthropomorphism popular in Victorian farmyard paintings and evident on occasion in Butler’s work. She is more inclined towards the role of the naturalist, committed to seeing things as they are. She conveys a coherent sense of a rural world in which plants and animals have a central role.

McKeever is clearly drawn to that world, is enthralled by it, and she reflects it as accurately as she can, a witness to wasps and dragonflies and mushrooms as much as anything else. That’s a worthy and valuable thing to do.