Sheila O’Donnell: Architect who has spent a lifetime building connections 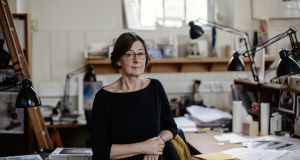 When we meet in London, Sheila O’Donnell has just won Woman Architect of the Year at the Royal Institute of British Architects awards. Earlier that day she had received an email from “the secretary of Lorrie Moore” – the noted US author – informing her that she had just been made a foreign honorary member of the American Academy of Arts and Letters.

“It came out of the blue,” says the cofounder of the Dublin-based firm O’Donnell + Tuomey Architects.

The practice, set up with her husband, John, in 1988, has always been an equal partnership – as one of the Woman Architect of the Year judges, author Lesley Lokko noted, O’Donnell did not have to break a glass ceiling because she and John “created a new reality”.

Architectural awards have disproportionately gone to men, even in practices run by a woman and a man

“I find it really hard to draw the man/woman line,” says O’Donnell. “In college we were reading Simone de Beauvoir and Jean-Paul Sartre and we absolutely believed that men and women were equal: that was the point of the practice, to say that.”

But what the award highlights, she says, are where the problems are; one being that architectural awards have disproportionately gone to men, even in practices run by a woman and a man – which is very common: in 1991 Robert Venturi – in practice with his wife Denise Scott Brown – was awarded the Pritzker Prize on his own, for work they had done together.

“[This award] makes it more overtly accepted that woman are equally responsible for design,” says O’Donnell. “I’d like it to get to the point where we say ‘well done’ to the male partner for the contribution he has made to a practice.”

O’Donnell, who won the Riba Gold Medal with Tuomey in 2015, was up against three other architects for Woman Architect of the Year. Her submission involved a presentation of her work on the Central European University in Budapest and an interview. “It was a good a conversation. When I came out, I thought, I enjoyed that. Sometimes in presentations you feel you are on the back foot or people are intimidating.”

They were, of course, interested in the gender question. “John and I are different, but I don’t know if the difference is a gender one: any two people are going to be different,” she says, describing how she and John will pass designs back and forth. But as the jury pushed for any differences in gender roles she told them how she might do a watercolour of the landscape at the beginning of a project and John will concentrate on the structure.

She draws elements of the Budapest university scheme on her newspaper with a generous black pen; showing the existing neoclassical buildings they worked with, the sloped glass roof above a courtyard, views of the Danube from the new library, how the building embraces everyone, with social spaces and routes through the buildings, including red staircases running across walls, expressing the veins of communication.

O’Donnell + Tuomey’s work has always been informed by these themes, adding new buildings to old and providing welcoming places with gathering spaces and routes through.

The university in Budapest is “like the Irish Film Centre on speed, multiplied by 10”, says O’Donnell of the Temple Bar building they completed in 1992.

“The [Budapest] project fits into a trajectory through the years: the Irish Film Centre was working with old buildings and pulling people into a courtyard.

“Our whole career, since the film centre to Sadler’s Wells and the V&A [the Sadler’s Wells Dance Theatre and the V&A East Museum they are working on in Stratford, east London] has been about trying to make places that people can hang out in.”

Other notable buildings include the Irish Language Centre in Derry with a glass-roofed courtyard, the Lyric in Belfast with its naturally lit “hangout” foyer, and the LSE Saw Swee Hock student centre with lingering spaces all the way up it, both on the stairs that wind around a lift, and areas off it.

Glass is also used to connect: from glazed roofs on underground lecture theatres or, at the LSE, up into a weights room.

“We are interested in inbetween areas – with no function – places where you can be either on your own or in a group. We try to make sociable spaces to help people connect easily, in an informal way, without any sense of intimidation.”

The openness of O’Donnell + Tuomey’s buildings starts before you even enter, encouraging people across the threshold. In the Educate Together school in Ranelagh, Dublin 6, there is a verandah “where people can size up the building and wonder if they should go in. This is the psychological aspect of architecture. It is quite hard to walk into a lot of cultural buildings: people think maybe they are not the kind of person who belongs here.”

Hence the importance of contingent spaces – such as the canopy at the Sadler’s Wells building, “where people can be in the aura of a building without pushing on the door handle”. O’Donnell adds how shiny new buildings, in which you see your reflection on the front door, can be forbidding.

O’Donnell + Tuomey also uses materials with a relaxed feel that are symbiotic with humans, such as board-marked concrete, timber and brick.

“You could spend many lifetimes finding materials that help people feel relaxed – certain materials are visually soft. In the Lyric flexible workspace there is brick inside and out: performers and audiences like something that feels like a warehouse.”

The practice’s use of materials and natural light bring their buildings the revered monumental quality that Irish architects have displayed so brilliantly on the world stage, but with an added warmth and humanity.

As O’Donnell thumbs through photographs of the Budapest building we pass pictures with artistic details. “Some photos are so gynaecological,” quips O’Donnell. Literally women in architecture then.

Born and raised in Dublin, O’Donnell “really loved” art, English and maths at school, and signed up to study architecture at UCD having little idea of what it involved. She began in October 1971 “and within two days I thought, oh gosh, I have found my place. Suddenly I was looking at the world differently. After the first week I was on a bus and so many things were jumping around. I saw things I never saw before. There was a whole sense of the world opening up.”

She remembers many “fantastic” tutors: including Pat Hickey, Cathal O’Neill and Shane de Blacam, who had just returned from working with Louis Khan in the US.

“They were so generous,” says O’Donnell. “Adrian Gale once sent me a postcard at college saying ‘why don’t you make the library circular?’.”

That generosity continued when Sheila and John moved to London, and worked with James Stirling. “London felt so incredibly inspiring. People were so welcoming and kind; helping us get jobs.

“Ed [Jones] and Jeremy [Dixon] both wrote to me when I won this award and I said to each, ‘you have always been so open and generous and so important to us’.

“John Miller, Sue Rogers, Ed Jones and Jeremy Dixon came to the Gold Medal lunch with us – they are a very, very important part of our lives. We were very lucky to have that.”

People and connections is the theme of so much of their work: with peers, with welcoming buildings, sharing a crossover between architecture and literature in the American award, and as an example of how women equally share the architectural stage.