Wish you were there: postcards as art and communication

A new book and exhibition demonstrate the wit, and power of the postcard 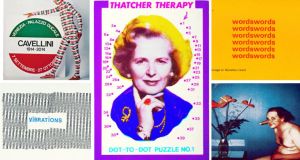 Postcards from the edge: Taken from The world exists to be put on a postcard, by Jeremy Cooper

The advent of different technologies dates us. Those born before calculators can usually manage mental arithmetic. Those who don’t remember calculators at all came of age in the smartphone era. The ability to spell, read maps and – going back further in time – possess a strong dialling finger, are all markers of particular eras. So who among us recalls the mind-blanking effect of a small white rectangle of card, and the sudden brain freeze of not knowing what to write beyond “having a lovely time, wish you were here”?

The buying and sending of postcards was once a feature of every trip, from a short break to a long vacation and, although most tourist destinations feature squeaky racks of curling cards, fewer and fewer still make a point of sending them. Nonetheless, the postcard has always offered extraordinary opportunities for communication, not least for artists.

The World exists to be put on a Postcard, a new book, and exhibition at London’s British Museum, looks at the art of the postcard from the 1960s to the present day, based on the collection of auctioneer, writer, art historian and antiques dealer Jeremy Cooper.

Through works by artists from Gilbert and George to Yoko Ono, Carl Andre to Rachel Whiteread, and activist collectives GalGran Fury to the Guerrilla Girls, the results are both a mini-art history lesson, and a snapshot of the concerns of a pre-Instagram era: modern, and yet somehow quaintly dated.

The artists in Cooper’s collection are not those who make work to seduce you with its beauty. Instead, they are aggressive, subversive, satirical, witty, scratchy, self-promoting, angry, and frequently wise.

Of course, the history of the postcard goes back way beyond the 1960s. They evolved with the postal system, and the introduction of flat rate postal charges, made possible by the invention of stamps. Prior to that postal charges were paid by the recipient, and calculated on the basis of distance travelled. The world’s oldest known postcard was sent from, and to the Victorian writer, Theodore Hook, probably as a joke on the postal service (the image is a caricature of post office workers). It was also, for a while, the most expensive ever sold at auction, although the £31,750 it made in 2002, was also connected to the fact that it was stamped with a Penny Black, the world’s first adhesive stamp.

That record was broken in 2015, when a postcard from Picasso to his friend, the French poet Guillaume Apollinaire, dated September 5th, 1918, and featuring a Cubist drawing by Picasso in lieu of a message, sold for $188,000. The front of the card was one of those generic tourist scenes, in this case, the French town of Pau.

The cliches of location are a feature of postcards. In Ireland in the 1960s, John Hinde made the Butlins holiday camp, Mosney (now part of the national disgrace that is direct provision), seem an epicentre of luridly colourful delights; while his image of adorably ginger children with an equally adorable donkey laden with turf is a classic.

In The World Exists… similar cliches are explored, and exposed, as Stephen Shore’s Greetings from Amarillo – Tall in Texas series (1971) shows a series of nondescript architectural edifices under clear blue skies. Anwyl Cooper-Willis’s The Postcard is a Public Work of Art – but should it be? (2013) is more provocative. A postcard advertising the Cornish resort of Penzance and featuring a cheerful blonde woman water-skiing, is overlaid with the all-capitalised text: viewer advisory. image may offend, upset or mislead. Smaller text cites “stereotypical, western female figure type [as the] cause of body-shape dissatisfaction, anorexia, bulimia…”

A separate section of invitation cards to exhibitions includes Andy Warhol as well as Joseph Beuys, Carl Andre, Robert Rauschenberg and Barry Flanagan. Here, the interest lies in that idea of the fetish: that this square or rectangle of card is a memento of an event, carrying the charge of the idea of a moment in art-history. In most cases, it seems more of a weight than a small square or rectangle of card can bear.

Rauschenberg’s choice of cardboard to reflect his use of cardboard in his collages makes art-historical sense, as does the idea of the card in terms of his rejection of art-world hierarchies.

The resulting brown rectangle with red text (address, date), and Rauschenberg’s signature is just not terribly interesting as something to look at.

The postcard-as-invitation works best when the images are strong. Joel Fisher’s Photo of Matt E Mulsion (1979) is a good example. Matt E Mulsion was gallerist Robin Klassnik’s dog, and Fisher’s image of the dog’s deep and knowing eye is powerful and arresting. The image is part of a pair – the second being an image of the artist’s own eye. In a nice footnote, Matt E Mulsion lives on: Fisher named his gallery, Matt’s Gallery, after his dog. The gallery is one of London’s most enduring and successful.

In Ireland, and not featured in this exhibition, the postcard-as-invitation also flourished, and extended, for a while, into the postcard-as-catalogue. For a time, Limerick’s EVA (then EV+A) produced blocks of postcards, bound with a wide elastic band, featuring all the artists in the exhibition.

Intending to keep mine together for posterity, I still come across them from time to time while searching for something to write shopping lists on, or to send a thank you card: there’s Dorothy Cross’s Rugby (1995), from EV+A 1996, a grainy image of what looks like a sordid sexual scene – a male hand, grasping at a buttock, scarcely protected by a slip of white fabric. Given the title, it is, of course, a scrum.

The dispersal of my sets of EVA cards, and similar series from some of Ireland’s art colleges, points to the ephemeral nature of the postcard, and the value of collections such as Cooper’s. Based at National College of Art and Design, the National Irish Visual Arts Library does a brilliant job of archiving such material. They welcome relevant donations, and it’s all online at nival.ie.

Recognising how postcards can find audiences beyond the gallery or museum, and how preinternet, postcards could quickly and easily travel the world (they still can, it’s just the internet is quicker and easier), it’s unsurprising that activism is such a strong feature in The World Exists… Given its preinternet heyday, it’s also unsurprising to see, and remember, the preoccupations of artists at the time. Paul Morton’s Thatcher Therapy (1984) is a brilliant dot-to-dot puzzle that encourages you to obliterate the former British prime minister’s image.

Cath Tate’s 1982 Prevent Street Crime, and South Atlantic Souvenirs’s Crime Wave from the same year, also both take digs at Thatcher. Gender imbalance both in the gallery and in advertising is tackled by the Guerrilla Girls and Jill Posener, and though these images date from the 1980s, it is tempting to wonder how much has really changed.

Although fewer people now send them, postcards are still popular among artists, and more than 1,000 will go on show in Dublin and Cork in April and May of this year as part of the Incognito exhibition in support of the Jack and Jill Foundation. Participating artists range from the well known to the just starting out, and all have contributed unique postcards, which are exhibited, and sold, anonymously, at just €50 each. The images will be available to view online from early March at incognito.ie. In this context, the art postcard becomes the perfect balance of the small and the affordable – and in a good cause too. The start of some new collections perhaps?

My favourite piece from The World Exists comes from David Shrigley. Brilliant (2007) shows a cartoon image of a small boy, looking at a tank containing a fly-speckled severed head. “What is it Daddy?” he asks. “It’s bloody brilliant son. That’s what it is,” replies his father.

You won’t get any arguments here.