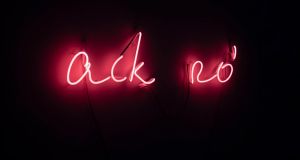 What is it? Ack Ro’ is a neon installation piece by Jaki Irvine, one of a group of 28, all spelling out fragmentary anagrams taken from the title of Neil Diamond’s song Cracklin’ Rosie.

How was it done? Neon tubing has long been a staple material for sculptural installation. Here Irvine treats the song title as a kind of alphabet, coming up with a number of words that engage us in the business of interpretation: “alone, alone”, “o”. The pink light might also recall nighttime signage.

Where can I see it? The 28 neons are part of Irvine’s exhibition Ack Ro’ at the Kerlin Gallery (Anne’s Lane, South Anne St, Dublin, January 24th-February 29th, kerlingallery.com). The multimedia installation also includes a 12-channel video work distributed throughout the gallery, featuring a recording of an atmospheric musical composition. Vocalist Louise Phelan is accompanied by flute, percussion and piano (Joe O’Farrell, Izumi Kimura and Sarah Grimes). We see a mouth singing, a piano keyboard that drifts in and out of focus, a cymbal vibrating, but also another nine apparently unconnected snippets of video imagery of Dublin and Mexico City (for some time she has lived between the two cities), with snippets of street sounds.

Is it a typical work by the artist? Commentators have had difficulty in settling on what a typical work by her might be, though they are usually struck by the singularity and emotional intensity of her vision. Scripted video has been her main medium. Obsession and obsessive behaviour (often self-obsession) have been consistent interests, though so too are trivialities and the everyday. She likes to pull the perceptual rug from under our feet, having lulled us into thinking we know where she’s going with a piece. References to quasi-scientific research and analysis in her fragmentary narratives point more to a disconnect between protagonist and subject than any real insight or comprehension on their part. The world eludes their grasp.

Animals, especially in the context of human interactions with animals, figure a great deal. Perhaps the unknowability of animals’ perceptual worlds represents and mirrors the opacity of human behaviour. The gallery note accompanying Ack Ro’ suggests that her underlying concern in the work is the fragmentation and breakdown of meaning that comes with dementia. Hence, presumably, her dismantling of the song title, and an allusion to the way music and songs can endure in the memory – melody, rhythm, lyrics – in unpredictable but powerful ways.

Music has been an important component of Irvine’s work, as witness one of her best pieces to date, If the Ground Should Open . . . at the Irish Museum of Modern Art; a commemorative work marking the centenary of the Easter Rising and, specifically, the subsequent understated role of women in the rebellion. Irvine has written a novel, Days of Surrender, based on the stories of two women, Elizabeth O’Farrell and Julia Grenan, both closely involved – O’Farrell was beside Patrick Pearse as he surrendered, only to be subsequently airbrushed out of photographs of the moment.

Dancing with the Stars: Shock exit for teary-eyed Sinéad O’Carroll
9

Growing up in Derry: ‘The Troubles was like a fog that hung over everything’
Real news has value SUBSCRIBE