Maser in Mountjoy: ‘The energy was insane. I was genuinely scared’ 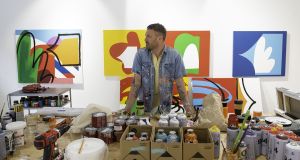 Maser at his studio on Charlemont Street in Dublin: 'I met so many homeless people while I worked on murals around the city'

Al Hester, or Maser as he prefers to be called, has come a long way since he started out as a graffiti artist in Dublin when he was just 14-years-old.

His latest commission, following on the success of his large-scale Glendalough exhibition at the Contemporary Irish Arts Centre in Los Angeles is to create this year’s centrepiece for the Art on Paper Fair in Manhattan in March. Now in its sixth year, the exhibition of over 100 galleries is devoted to all things paper: from dealers in drawings, to photographs and prints.

Those familiar with Dublin’s Camden Street area will be aware of two of Maser’s six murals scattered around the capital: U R Alive and Don’t Be Afraid. He also painted the mural on the towers in Ballymun in 2010 prior to their demolition.

Since 1995, the muralist has travelled the world using city walls and buildings as a backdrop for his art, which includes the Repeal the 8th mural in Dublin, collaborations with national institutions, festivals and galleries throughout the globe and a stage for the Web Summit at the RDS.

His first studio was a room in the recently demolished Bernard Shaw pub on South Richmond Street in Dublin, where he became the resident artist.

“It was 13 years ago and I had a great relationship with the guys from Bodytonic [who ran the bar and music events] and I knew we had a purpose but wasn’t quite sure what it was. We were so driven, yet we were also so cold and so broke.”

In 2009, an old abattoir off Newmarket Square became his second studio: “Maybe you just have to freeze to be an artist,” he grins, and from there came his breakthrough moment: a collaboration with singer/songwriter Damien Dempsey on the They Are Us project.

“Streets are just transient places for us, but for homeless people they are their entire world. I had met so many homeless people while I worked on murals around the city, some of whom literally ended up on the streets overnight, and that’s how notion of They Are Us came about.”

After meeting Damien Dempsey for a chat, Dempsey agreed his lyrics could be used by Maser to highlight the plight of homelessness in Dublin and raise money for the Simon Community. The project ended up raising €29,229 for the charity through the sale of Masers’ screen-prints, paintings and photographs.

“At the time I was almost broke and sleeping on a friend’s couch, so couldn’t manage to make up the balance to bring it to €30,000, which went towards buying a medical van for The Simon Community.” he says.

Since then he has been commissioned by the Mayor of Sydney to create an original piece for the New Year’s Eve celebrations at Sydney Opera House, Australia in 2015. Further commissions included creating an original artwork in response to the Vermeer exhibition for the National Gallery of Ireland, in addition to the mural It’s All Good on the Peace Line in Belfast.

In tandem and through a sense of “giving something back along with a bit of curiosity” he spent two months at Mountjoy Prison teaching art (he studied fine art and then qualified with a distinction in Design Communication).

“So many lads that I met on the streets while painting ended up there, and I wanted to understand their journey, so I wangled my way in and gave art classes. The energy was insane. At first it felt like entering a lion’s den and I was genuinely scared”

He needn’t have been, his reception proved welcoming and he ended up painting murals all around the prison.

The year 2017 saw the artist collaborate with President Michael D Higgins on a series of limited edition prints titled Of Utopias followed by two installations for the Seamus Heaney Museum by the National Library of Ireland.

Last year he was invited to create a large-scale installation for the iconic Spanish Steps at Wembley Stadium in the London.

But his proudest moment of all was creating the mural for Repeal the 8th at the Projects Art Centre, which became the official emblem for the repeal campaign.

His studio, Atelier Maser on Charlemont Street which opened in 2018, is a multidisciplinary space, “an incubator for upcoming artists”, where he paints alongside exhibitions and meditation and yoga workshops.

“Meditation gives me the headspace that I need to paint, and painting pays the bills, if one thing is disjointed there is no harmony in my life.”

Some will find elements of this show vaguely familiar. In 2017, global technology company Apple licensed a selection of Griffin’s chromatic series for their iPhone 8 campaign, as the wallpaper for their devices, and in 2018, Griffin’s art film Chromatic was showcased as part of the TED Age of Amazement conference.

Adam Driver: ‘There’s a double standard for men and women’
6