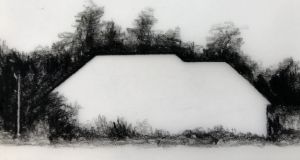 Clifford Collie’s quiet, thoughtful, beautifully judged paintings view the self in relation to the natural world and usually hinge on an immersion in nature, envisioned here as The Imagined Garden. Since the turn of the century, he has mostly divided his time between Ireland and Spain.

The proposition of Viewpoints is that children learn about their autonomy, agency, responsibilities and rights as much through stories and fictions as via the real world. Seven seasoned illustrators – Fatti Burke, Peter Donnelly, Chris Judge, Róisín Hahessy, Chris Haughton, Mary Murphy and Niamh Sharkey – were commissioned to create new illustrations on this premise, each installed in Gallery 2 as a large-scale mural.

Róisín Bohan of Basic Space curates a show by Utrecht-based Cara Farnan, who is interested in the overlap or space between knowing and sensing the world, with the metaphor of river and sea as individual presence and the wider world. The show includes sculpture, drawing, text and, with Jennifer Moore, sound.

Bernadette Burns’s multimedia show stems from a diary entry by her grandmother Tessie Burns in 1920, in which she concisely records the fatal shooting of her younger sister Eileen. Eileen was 25, pregnant and standing at her garden gate, holding her infant daughter when a bullet, fired by an Auxiliary from a passing truck, struck her. She died several hours later.

The Salt House of the title refers to Sharon Kelly’s memory of a salt store recalled from her childhood, a forbidden building by the railway and close to her home in England’s West Country. Drawing is at the heart of her work, which also involves animation, painting and print as she explores ideas of “personal memory, space and childhood”. Through the filter of memory, ordinary places, materials and objects are infused with hidden layers of meaning.