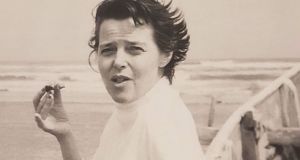 She wore ball bearings as a necklace, always started at eye level when composing an interior, advised anyone who couldn’t afford artworks to look at nature, and her obsession was building for the masses, bringing the benefits of modernity to all. This was Charlotte Perriand (1903-1999) the modernist French architect and designer, a woman way ahead of her time and now the subject of a major exhibition in Paris.

In an interview with The Irish Times in October four years ago, the distinguished Irish architect David McNulty - then head of architecture at Louis Vuitton - said that he was particularly proud of realising the design of a 1934 beach house by Perriand, who originally conceived it as a cheap holiday home. It was built and furnished by Louis Vuitton for the Miami Design Fair in 2013 using her sketches to the delight of her daughter Pernette Perriand-Barsac, then 77. McNulty wanted to do more. It certainly created greater interest in her work.

The exhibition, Charlotte Perriand: Inventing a New World, is at the Fondation Louis Vuitton where, for the first time, all the galleries in the massive Frank Gehry building are devoted to the work of one person, a major female talent and leading figure in 20th century design marking the 20th anniversary of her death.

Visitors can see and experience at first hand the beach house, the audacious circular Tonneau refuge from 1938 inspired by a merry go round and her celebrated steel and leather tilted reclining chair from 1929 which was designed in tandem with Le Corbusier and Pierre Jeanneret with whom she collaborated for many years. (Le Corbusier suggested that the credits for the chaise longue should be given alphabetically – so he came first.)

A great sportswoman, both mountaineer and skier, her design for the 30,000-bed ski resort Les Arcs in Haute Savoie was another of her countless projects, an extraordinary achievement expressing her passion for mountains.

The room settings in the exhibition are notable because visitors can sit on her chairs, see her many ideas for a bedroom, a bathroom or a kitchen and how modern and compact her dwellings seem today. Her tables were never conventional in shape, but freeform always accommodating the demands of their sitters and she was as inventive with materials like steel, wood and leather as she was with bamboo, jacaranda and canework after periods in Japan and Brazil.

Wherever she worked she made use of local materials. Given her freedom at 18 by her mother in 1921 – unusual at the time - she travelled widely before joining Le Corbusier in 1927 and collaborating on home furnishings and furniture for his interiors.

“She recommended keeping your eye open like a fan” according to her daughter, “taking things in, making things your own before you created. She did that all her life.” She was passionate about both the vernacular and the latest technologies.

A firm believer in collaboration – even at the age of 90, she wanted to bring together architects, urban planners, sociologists, economists and scientists to discuss the future of the city with young people in order to find out how they wanted to live. Brilliant at creating storage, her racks, cupboards and bookcases became her signature. She designed furniture for more than 70 years.

What stands out in her interiors is the use of art – the bold works of Fernand Leger, Le Corbusier and Picasso not only reflect the period and her milieu, but also show how she integrated art into everyday settings whether it was a gigantic piece by Leger, a drawing by Picasso, a big kitchen blackboard or even pieces of driftwood from the beach.

She had no interest in commercial value and believed in what she called “art brut” – lessons from the laws of nature and foraged for pebbles and other washed up objects on beaches and photographed them for interior display. Her favourite object was a plastic bottle cut across the middle, the edges folded back for a vase which she had found in a Brazilian market.

Surprisingly, though they were contemporaries, she and Eileen Gray do not seem to have met. According to Mary McLeod, author of a book about the two designers, one of their big differences was collaboration and a different network of friends.

“Perriand saw herself as very much part of a larger group campaigning for modern architecture and I think Gray, given in part, her personality worked more by herself and with a much smaller circle even if she was officially I believe a member of UAM”, the Union des Artistes Modernes.

Perriand believed that the key thing for a woman “is her freedom, her independence, being on top of what she is doing”. She came from a working-class background – her mother had her own workshop, made waistcoats and worked for a couture house on Place Vendome all her life where she met her husband, a cutter. Both came from peasant stock.

‘A courageous woman who dared’

Her mother seems to have been quite an extraordinary character, according to Pernette. “In 1889 she set her heart on going away with Buffalo Bill who had come to Paris with his Wild West Show and she wanted to give everything up to follow him”. Charlotte also had an uncle who helped to install the Statue of Liberty in New York and all that may have influenced her desire to travel.

“From her parents she inherited the love of fine craftsmanship (her father loved furniture in plain wood), the taste for beautiful materials, rigour in work and the sense of excellence in execution,” says Pernette.

Politically committed, Perriand maintained that the profession of architecture is work in the service of humanity and that a habitat should create calm, relaxation and harmony. For McNulty, “she was not only an iconic designer in a profession dominated by men, she was also a courageous woman who dared. What I find remarkable was her absolute determination to make a difference to people’s lives through thoughtful design. We, now and future generations, owe her a huge debt of gratitude.”