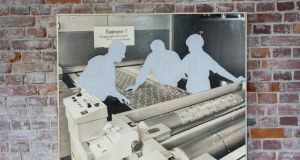 It’s a grim time to publish a book. Apart from the fact that bookshops have been closed, book launches are usually social, communal events.

Last week, the Gallery of Photography made the best of things with an online launch for Maria Kapajeva’s new publication Dream is Wonderful, Yet Unclear, under the auspices of Creative Europe’s A Woman’s Work, dedicated to exploring the role of women in labour via photography. For the gallery, it’s the first in a projected online series, for as long as circumstances dictate.

Kapajeva, who studied photography in the UK and is based in London, is Estonian, and her multidisciplinary project – original photographs, neon and other sculptural installations and archival material – all now assembled in book form, is thoughtful, ingenious and in ways poetic. It’s already formed the substance of two exhibitions, including one last year in Estonia.

At the centre of the work is a former textile mill in Narva, Estonia, and the people whose personal histories related and relate to it, a community of workers. That includes Kapajeva and members of her family. Both her parents worked there, her mother Natalja as a fabric designer, and the artist spent a great deal of time at the mill as a child, dreaming of one day working there herself.

After about 150 productive years, and employing an extraordinary 12,000 people, the mill fell prey to the same global economic pressures that accounted for the modest clothing industry in Ireland decades ago, though mind you the Narva mill did survive until the end of the first decade of this century. Kapajeva sees it as both a personal story and a public one, an amalgam of local experiences and larger historical currents – and a tribute to, particularly, the women who worked in the mill.

Her video, About the Bright Way, alludes to and draws on a 1940 Soviet propaganda film following the transformation of a young woman, played by Lyubov Orlova, from peasant labourer to weaver – and not just an average weaver, an heroic, exemplary Stakhanovite (Kapajeva’s mother was, apparently, also regarded as an exemplary worker). The Soviet film inspired one of the Narva weavers she interviewed, Kapajeva notes.

The title of both book and project also derives from one of the musical numbers that featured in the movie. But, Kapajeva points out, the song in question was subsequently censored, because of the potential doubt implied by the word “unclear”.

One of the strengths of the overall project is Kapajeva’s grasp of the multivalent nature of the material. Political and economic decisions fundamentally impact on and shape people’s lives, for better and, perhaps more often than not, for worse.

In her explorations of the mill she came across a great deal of discarded documentation. Finding a set of documentary photographs of the mill in production, she excised the figures of the workers, leaving blank outlines in the spaces they occupied in the midst of the machinery and textiles in the images; an obvious gesture, perhaps, but an effective one.

Published by Milda, the book is quite an object in itself. Its silkscreen-printed cover features the mill’s Soviet logo. A substantial 304 pages incorporate photographs, both the artist’s own and archival material, and those stark cutouts. Open the cover and the edge of the Swiss binding, a form of binding notably popular with photographers and artists, is exposed (the designer is Jaan Evart). The effect is to create a subtle link between the book-as-object and it subject matter.

Getting to know you

The Doorway Gallery’s response to the coronavirus challenge is Getting to Know You, a series of weekly online exhibitions each featuring a gallery artist. Apart from showcasing the work, the idea is that virtual visitors can get a glimpse into the artists’ working lives. As gallerist Denise Donnelly points out, the gallery schedules its exhibitions programme way into the future – as much as three years in advance. Sadly for those whose shows fall around now, of course, the gallery remains closed.

So online access is the best available alternative. But her aim is to provide something more than and different to simply checking out a website to click through an inventory. The scheme allows not only a look at the artists’ new work but also, if you download the gallery app, a chance to see any particular piece in the context of your own surroundings, as well as video interviews, and Q&A events on social media platforms.

Donnelly emphasizes that, to preserve the link to the gallery’s planned programme, the work will not be available to view until the start date of the online shows.

First off was Dave West, including a Facebook Live evening – wine optional – in the company of the artist. Dan Henson features until May 17th. His work combines virtuoso realist painting with a liking for abstract form and pattern in nature. Thereafter, the ever-popular colourist Lucy Doyle, known for her still-life, interior and figure compositions, takes over, followed by Adam de Ville, Marika Rosenius, Francis Boag, Cormac O’Leary and more.

It is a diverse range, linked by the artists’ commitment to the craft of, usually, representational painting. See thedoorwaygallery.com, with links to instagram, Twitter and Facebook.