Rich and varied collection evokes an exceptional time in life 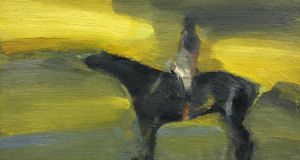 The Time of Our Lives (After Hugo Williams)

Oliver Sears’s online group show The Time of Our Lives takes its cue and its title from a Hugo Williams poem. The expression evokes an exceptional time in life, and the poem locates the time of our lives in the past, in the experiences we’ve had. It’s a corrective to our liking for and tendency towards anticipation. The implication is all the clearer given the current crisis: little did we know that what we took for normality was so wonderful, until it was taken from us. In the face of the terror of the future, Williams turns to the past.

Sears invited artists to propose work with a view to the sentiments articulated in the poem. He’s included a piece by the late Barrie Cooke, Punakaiki Rocks V, from 2010. It is an appropriate choice. Cooke regarded New Zealand as a paradisiacal landscape, largely free from the environmental depredations of other parts of the world, and his view of deep blue ocean, glimpsed between an interrupted ridge of layered, pink-hued rock, is a recollection of a delicious moment filled with the promise of warmth, space, light and beauty.

Michael Canning, on the other hand, whose landscapes characteristically evoke a calm, pastoral environment, could almost be responding to coronavirus with his painting Black Oval III, in which a central black void seems to be consuming the remaining fringes of light around the edges of the composition. Except that the work is dated 2013, pre-Covid by a long shot.

David Eager Maher’s elliptical narrative paintings usually have a retrospective quality. His work, featuring a girl venturing out onto a terrace, could easily be rooted in the past, but it is a new piece and is prosaically titled Self Isolating, Day Seven.

Paul Gaffney, has done a great deal of outstanding work involving photography and landscape. He is interested in and adept at conveying the immersive sense of being in the landscape. Here he presents an autumnal view of an overgrown woodland trail stretching on into the distance, inviting one to walk along it. Which presumably, unless it falls within a 2km radius of your current residence, you cannot do.

It’s a good time to check out Gaffney’s past projects (he has a good website), all of which address how we might tweak and enhance our awareness and experience of the wild rural environment.

Dating from this year, Amelia Stein’s expansive, atmospheric photograph, Garden, Laragh, has an idyllic, dreamlike quality, all the more so because it is in black-and-white, a paradise out of reach if not lost. The same could be said for Donald Teskey’s woodland river view in his A Shout Out to Spring, painted this year. Ed Miliano’s Dawn Chorus is equally celebratory, in a quieter vein. It’s a beautiful evocation of a hazy early morning. Sophia Campbell, meanwhile, takes a dimmer view. Her soft-edged study of narcissi is titled Stolen Spring.

Nick Miller is probably best known for his rural landscapes reflecting the sheer fecundity of nature (perhaps, on occasion, amplified with doses of agricultural fertiliser). Here he departs from dry land with a vivid, fantastically lively view of a stretch of turbulent, stormy sea, a glimpse recorded pre-lockdown, at the beginning of January, though conceivably within 2km of his home on the Sligo coast.

Sarah Iremonger’s spare, flat-coloured composition 3 Vessels consists of three overlapping profiles of the vessels, which span thousands of years, from Sudan via Thailand to North America. In their elegance they exemplify the persistence of forms and materials in utilitarian objects across cultures and millennia, and the longevity of an aesthetic sense.

Hughie O’Donoghue’s Lavender Field is one of a series of works that relate to late, lost paintings by Van Gogh. A small, intense painting, Lavender Field seems to nod towards Van Gogh’s sun-drenched On the Road to Tarascon, in which the painter, working materials in hand, tramps through the hot French countryside, in search of a suitable vantage point. Francis Bacon was so taken with it that he famously painted his own version of the work.

Although it is listed as missing, it was at one point thought to have been destroyed by fire when the Allies bombed Magdeburg during the second World War. More likely it was removed for storage with hundreds of other artworks to the Stassfurt mines (it was high on the list of the so-called Monuments Men, whose story is told, in popular form, in George Clooney’s film, based on an original book).

Alas, even if that is the case, the painting may have perished in either of two fires in the mines during April 1945, by which stage the Americans had arrived. To complicate things further, the fires may have been a cover for looting and there are suggestions that some items have since surfaced intact. Though so far, not the Van Gogh. O’Donoghue recalls not just this potentially destroyed painting, but also the insights it offers into Van Gogh’s life and feelings.