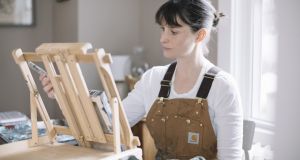 Petria Lenehan at work on her River series of paintings. Photograph: Rich Gilligan

Petria Lenehan is known in Irish fashion circles as the former proprietor of the Dolls boutique in Dublin and as a clothing designer. Now the Dublin native has turned her hand to art, and has just unveiled her first series of paintings inspired by the river that runs close to her home in the village of Cornwall-on-Hudson in upstate New York where she lives with her husband, acclaimed photographer Rich Gilligan, and their two daughters Robyn (6) and Simone (1).

At the time of writing, Lenehan and her family have been in lockdown for almost four weeks and she’s switched from her studio in the nearby city of Newburgh to working from home – taking turns with her husband to work during the day while caring for their two little girls.

Having lived in an apartment in Brooklyn when they first emigrated to the US, Lenehan says that they are lucky to have a garden for the girls to play in and to live near the Hudson’s waters.

It is the Hudson that has inspired Lenehan’s first official foray into painting, although art is something that she has dabbled in since her teenage years. Self-taught, she takes photographs on her daily walks along the riverbank and it is these photographs which prove the starting point for her paintings. The result is a series of abstract, dreamlike images.

“I grew up in Seapoint and have spent a lot of time in Co Kerry,” she says. “I have always surrounded myself with water and there is something that draws me to the river each day. The Hudson is so vast at the point near us that it feels more like the sea than a river – which really helps me to feel at home.”

Painting is a very personal process for Lenehan who is keen to impart a sense of emotion in her work. “I think the paintings are very personal. I feel that I really want the paintings to give a feeling of the place to the viewer so the painting is almost like a poem to the place. It is so intuitive – it’s about the memories I have of a place or the feelings I have when I’m there.”

In this first series, Lenehan has opted to use liquid blue and grey tones inspired by riverside wanderings during winter when the snow is on the ground and the colours are moody and muted. “I am more attracted to those colours and tones, to the in-between weather and the tones it brings up in a place,” she says.

“When I was curating for my shop, Dolls, or designing my clothing collection, less was always more. For other designers it might be all about colour or print, but the longer I was working as a designer, the more interested I became in using neutral colours. Similarly, I feel with the paintings less colour works better for me.”

Fans of Lenehan’s eponymous clothing brand will be disappointed to learn that, for now at least, fashion will take a back seat in her creative endeavours. She says that there is “something very refreshing” in it just being “her and the paint” – in stepping away from producing collections of clothing.

“There is a freedom in it that is very attractive to me at the moment,” she says. “For now I am pausing on the fashion design. It is hard to make a concrete decision but I want to see where the painting takes me. I feel there is perhaps more longevity for me in painting as a career. At the moment, painting feels more meaningful so I am going with that and will see where it takes me.”

Lenehan cites Irish artist Margaret Egan as a friend and mentor. “She is an amazing artist and a friend of myself and my mother’s and has given me lots of advice. To be honest though, the work is coming from me and from the inside rather than being influenced by other artists or by trying to emulate the work of anyone else.”

Advice comes too from Lenehan’s husband, Rich Gilligan, who as an accomplished photographer acts as a valuable sounding board. “I wouldn’t say that we sit down to discuss the work overtly but Rich is definitely a very good critic to have on hand. I really trust his opinion, we know each other so well and I know he is always right. Sometimes you don’t want to hear it but I very much appreciate his opinion. He’s able to cast a good critical eye on the work.”

When you’ve been defined as one thing, in her case a fashion designer, I ask Lenehan whether it is daunting to call yourself something else, to explore other creative directions and then to put yourself out there publicly, especially in the era of social media.

“There is less to hide behind with the painting but I feel that as I get older I am more able to be vulnerable. It is, however, still daunting when you put something out there,” Lenehan admits. “I feel, though, that if you feel good about the work and you are being true to yourself it’s less daunting. If people like the work, great, if they don’t, well that’s okay too. More than anything it feels good to get it out there and people have been very supportive and genuinely excited about the work.”