A new wave of appreciation for Agnès Varda: This week’s best art exhibits 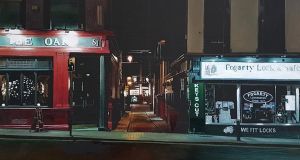 Two approaches to space, the final frontier, by painters Megan Burns and Francis Matthews. He is at home in the nighttime city streets, cavernous and deserted in the glare of artificial light, with lanes leading off into the unknown. She generates abstract spaces that suggest access and familiarity and depth, but in the end lead us around in circles. Not at all an obvious combination, but an intriguing one.

Works by six artists in response to the life, example and work of the great film-maker and artist Agnès Varda, who died earlier this year and whose extensive and distinctive oeuvre showed her commitment to freedom, women’s rights and personal autonomy. The artists are Laura Fitzgerald, John Graham, Salvatore of Lucan, Jonathan Mayhew, Bea McMahon and Fiona Reilly. Aisling Prior is the curator.

I dreamt I dwelt

Just three works, but each a conceptually rich sculptural piece. A shark carved in Carrara marble soars from a sea of stone. From the quiet of slumber, two ears listen, again carved into marble, as they lie on marble pillows. And a mound of mixed stones – granite, quartz, sandstone and marble – are inscribed with the letters of the alphabet – showing culture and nature together.

I Am What You’ve Come to See

Sonia Shiel transforms Void’s three spaces into “a circular narrative”, casting the visitor as the protagonist who responds to a series of instructions, “strategic objects and obtuse props” in negotiating a digital landscape somewhere between the archaeological past and the futuristic. Whatever our conscious intent, she suggests, we are forever open to the influence of magic and mystery.

Claire Halpin draws on a range of sources, including media, historical maps of conflict, archaeological documentation, biblical narratives, art history and computer gaming imagery as a means of exploring how histories of contested territories are constructed and promulgated, especially in the cyber age.