The single best way to guard against obesity is to reduce our portion sizes, say nutrition experts 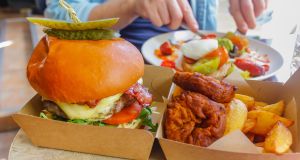 “Men tend to think that bigger portions are the norm. Some think big portions are ‘manly’ but this can cause weight-gain.” Photograph: iStock

Bigger has always been seen to be better, but in many cases less is more – for instance, less food on your plate could mean more miles on the clock.

I’ve just returned from the US, where upon ordering a chicken salad sandwich in a restaurant, I naively expected to get a modestly-sized creation (I figured it would be a bit bigger) with perhaps a few extra leaves or coleslaw on the side to fill up the plate.

In reality, I was presented with what I can only describe as a giant platter with what appeared to be two chicken burgers with a mountain of fries on the side. It would have fed my entire family – and I have three teenage boys.

Unfortunately for America, the country has gained a (somewhat fair) reputation over the years as being a nation full of fast-food joints, big portion sizes and expanding waistlines. And while this may be true of certain areas, our Yankee cousins are not the only ones guilty of eating too much food.

On this side of the water, both Ireland and the UK are also becoming more and more fond of supersized meals, with one in four Irish adults being classed as obese and one in four children already overweight. And it seems men are more likely to have weight problems than women, with 70 per cent of Irish males tipping the scales at an unhealthy weight, compared to 52 per cent of females.

“Men tend to think that bigger portions are the norm,” says Dr Cliodhna Foley Nolan, director of human health and nutrition with Safefood Ireland. “Some think big portions are ‘manly’ but this can cause weight-gain and studies show that people who were given larger portions tend to eat more compared to those with smaller portions.

“There is evidence that serving sizes of foods are getting larger both within and outside the home and that this may be contributing to the problem of obesity. Recently, an Irish survey to assess consumers’ perceptions of ‘average’ portion sizes of bread, cereals and potatoes found (from over 1,000 responses) that almost 75 per cent chose larger portions as one that ‘best fits with their idea of average’ and among these, the larger proportion was men.”

But it’s not just men who are guilty of eating too much, because while they score the highest BMI in Europe, Irish women are also at the top of the leader board, coming in third in this category and one in four children in Ireland are also classed as overweight or obese, so eating too much is a problem which affects the entire nation.

Dr Foley Nolan says piling too much food on our plates may also be a direct result of products claiming to be healthy so the consumer feels less guilty when eating more than is necessary. And research from the University of Ulster indicates that products with health and nutrition claims such as ‘low fat’ and ‘reduced fat’ may be contributing to people eating larger than recommended portions.

“There has been a huge increase in the number of food products with nutrition and health claims sold over the last 20 years, but we also know that the population’s weight has continued to increase,” says Dr Foley Nolan. “We commissioned this research to explore people’s understanding of these products given their popularity and it shows that these foods are viewed by some consumers as a licence to overeat.

“However, in the case of many products, the fat that is removed in the ‘healthier’ product is replaced by other ingredients, such as sugar, and the calorie savings are small. Consumers need to relook at their portion sizes, as any benefit they might get from these ‘healthier’ processed foods could be undone by just how much of them they are eating.”

The aim of the University of Ulster research, conducted among more than 180 adults on the island of Ireland, who had a range of body weights, was to compare what people thought to be the calorie content and reasonable portion sizes of ‘healthier’ and ‘standard’ foods.

Survey volunteers were shown three pairs of food – one marketed as ‘healthier’ and an equivalent ‘standard’ product. They were then asked to measure a recommended portion of each of these foods. They were also asked to rate how guilty they would feel if they ate what they perceived to be an appropriate portion.

Principal researcher at the University of Ulster Professor Barbara Livingstone says the study supports what is described by many as “the health halo” effect.

“Consumers perceive these products to be healthier and with less calories than the ‘standard’ version food,” she says. “They see them as representing the less-guilty option and so eat more of them. So further education on what is a healthy portion size is warranted to overcome these misconceptions.”

If adults make an effort to read food labels properly and reduce portion sizes accordingly, they will not only be helping to improve their own health but will be doing a great service to the next generation who take guidance, not to mention meals, from their elders.

Dr Foley Nolan says while every child is different and their appetites vary from day to day, it is important to watch what they are eating and ensure their portion sizes are considerably smaller than the adults around them.

“As a rule of thumb, a five-year-old should eat about half the amount an adult does,” she advises. “Give children smaller portions to start with and if they want some more, you can give it to them then. But if they say they are hungry [between meals], offer them something nutritious like fruit and vegetables and avoid any fatty or sugary treats between meals.

“It is also important not to pressure children to eat all the food on their plates and allow them to stop when they have had enough. Make sure their plates and cutlery are child-sized too and when putting food on a plate for them, they should roughly contain one-third fruit and vegetables, one-third starchy food such as bread and potatoes and one-third dairy (cheese, milk and yoghurt) and protein (meat and fish).”

– Use a smaller plate. The same amount of food on a smaller plate gives you the impression of eating more without the extra calories.
– Make sure at least one-third of the food on your plate is made up of vegetables or salad. Pasta or rice should only fill a third of your plate.
– Never fill your stomach when you eat – always leave some room. You stop being hungry long before you feel full.