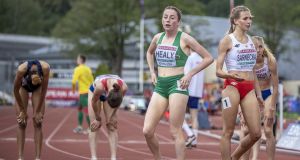 After running boldly and bravely from the front when no one else would Sarah Healy wrapped up another medal for Irish athletics by winning the 1,500 metres silver at the European Under-20 Championships in Borås, Sweden.

In the classic tactical race, Healy made her move with a full lap and a half to run after the field of 12 had crawled through the first 800m, and was still leading coming off the final bend, only to be passed by the super fast finishing Swiss runner Delia Sclabas in the final 80m.

For Healy, having already won double gold over 1,500m/3,000m at the European Under-18 championships last summer, it’s also her third medal in two years.

No one is arguing events in Borås are anything more than another small stepping stone to what potentially lies ahead, only Healy’s silver, along with a first ever heptathlon medal silver for Kate O’Connor and a rarely won bronze over 5,000m for Darragh McElhinney certainly augers well.

Healy would have preferred a quicker pace to run some of the speed out of Sclabas, silver in the women’s blue ribbon event still a fine reward from the 18 year-old from Blackrock AC in south Dublin. “Yeah, I decided to take it on, just to stay out of trouble, and speed it up from there, and give it everything” said Healy, visibly a little disappointed with silver, though no less complete with her effort.

Earlier in the driving rain, McElhinney went into 5,000m final as the only Irish teenager in history to break 14 minutes with his 13:54.10, his bronze medal in end sending him into elite company, John Treacy winning silver back in 1975, Mark Carroll winning gold in 1991. McElhinney bided his time until hitting the front with two and a half laps to go, staying in front until the Spaniard Aaron Las Heras kicked for home at the bell, taking the win in personal best of 14:02.76: Ayetullah Aslanhan from Turkey also ran a best of 14:05.01 to win silver, with McElhinney holding on for bronze in 14:06.05

“I might have got a bit exciting with 1km to go, but I was feeling controlled, until around 600m when I felt my legs go,” said the Glengarrif athlete. “I came here for the gold, so it is a bit of an anti-climax, but happy to bring something home for Ireland. ”

No Irish man had ever before won a sprint medal in the under-20 grade, these championships going since 1964, and even if Sexton was fastest in the race, he had to settle for fourth place in 21.18 seconds - the same time as bronze medal winner Matttia Donola from Italy.

Victory went to the Dutch runner Onyema Adigida in 21.08, with the German Elias Goer taking the silver in 21.16, only it was clear disappointment for Sexton, who had been leading in the straight only to fade over the last 50 metres. The 18 year-old Bangor athlete, already signed and committed to the Ulster Rugby Academy once he gets home, was racing in his last individual race on the track.

Immediately afterwards Davicia Patterson found herself in a similar position, finishing a close fourth in the women’s 400 metres, clocking 52.72 seconds, victory there going to the Russian Polina Miller, competing under the neutral flag, in a very impressive 51.72 seconds

O’Connor had made it medal number 18 for Ireland since 1964 when winning the heptathlon silver medal on Friday evening, the first by an Irish woman, at any level, in the seven-event discipline. Sommer Lecky also came very close to another medal in the high jump final, in a crazy close contest, finishing in joint fifth best of 1.84 metres. Improving the Irish under-20 4x400m relay record to 3:41.28 were the women’s quartet of Simone Lalor, Miriam Daly, Davicia Patterson and Rachel McCann, finished a close fifth.