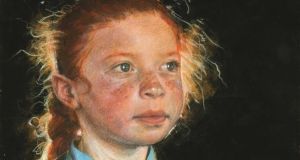 Incredible artwork, the laughter of children and Ryan Tubridy’s awful jokes were all highlights of an Irish art awards ceremony on Wednesday.

Speaking at the event, Minister for Culture Josepha Madigan said she was “blown away by the art” and “some even gave [her] goose bumps”.

“Art is part of the fabric of Irish life. We need to support and encourage children through art,” said Ms Madigan.

There were more than 20,000 entries and 126 prize winners aged three to 18. The overall winner was Hetty Lawlor, an 18-year-old from Mayo whose father won the completion in 1984.

Ms Lawlor will travel to Tokyo in August to have her artwork, Gráinne, displayed in an international exhibition. She said she is very excited about the trip.

Chen Yuxuan (13) from Ballyroan won first prize in the 12 to 13-year-old category for her self-portrait.

“I feel very happy,” she said. “I really didn’t anticipate it because they’re all so amazing.”

Walt Russell, an eight-year-old from Raheny in north Dublin, won a special merit for his piece, The Lads. “I feel very proud and excited that I’ve won something this big. The other art is very extraordinary and the best I’ve ever seen,” he said.

Tara Neville (14), from Kildare, said she was “overwhelmed” to win a special merit for her self-portrait.

“It was really exciting to win a prize. It’s mad that 6 or 7 year olds can do something an adult couldn’t,” she said.

Sixteen-year-old Pádraig McCarthy from Limerick won a special merit in the special needs category for his painting, Wimpy Kid at School.

He said: “I’m very proud of myself. It feels so good. The other artwork was very amazing, if I do say so myself.”

Jonathan O’Keefe (16), who won a prize for his piece, Pseudo Beauty, praised the high standard of this year’s artwork and said he was “really happy to be amongst the talent”.

Emma Seckington (11) from Wicklow, who was awarded a prize for her artwork Laochra Rua - Red Warrior, said: “I couldn’t believe I was meeting Ryan Tubridy. It was crazy.”

Dawn Hall from Texaco, who has been involved with the competition since the 1960s, said: “What always amazes me is children today are surrounded by technology and all sorts of gadgets but so many of them still seek recreation through art.”

The final adjudicator was Prof Declan McGonagle, former director of the National College of Art and Design.

Mr McGonagle commended the children for “their skill and attention to detail” and said they should all be “very proud”.

Mr McGonagle said the parents and teachers should also be praised for their care and guidance.

The full list of winners can be found at texacochildrensart.com.