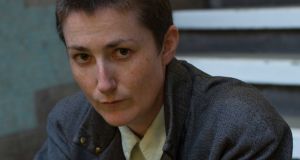 Doireann O’Malley, who was one of three winners of the Berlin Art Prize for 2018, announced on Friday night, has been exhibiting her contemporary art film series, Prototypes, in the Hugh Lane Gallery, Dublin, as well as in Berlin.

An Irish artist based in Berlin has won a prestigious award in the German capital for an artwork that is currently on show in Dublin.

Doireann O’Malley, who was one of three winners of the Berlin Art Prize for 2018, announced on Friday night, has been exhibiting her contemporary art film series, Prototypes, in the Hugh Lane Gallery, Dublin, as well as in Berlin.

The exhibition in Berlin has been visited by more than 4,000 people, with more than 2,000 attending the opening earlier this month.

The Irish artist was one of nine whose work was shown in a gallery in Kreuzberg, Berlin, for the past month. There were 650 applicants for the open competition prize.

A graduate of the Limerick School of Art and Design, Ms O’Malley has been living in Berlin for the past ten years. She has upcoming exhibitions in Vienna and Mexico City.

The film brings together transgender studies, science fiction, biopolitics, psychoanalysis, AI, and experimental sound, according to a description from a German grants body, Edith-Russ-Haus, on the artist’s website.

“She skilfully ties these to phantoms of modernist utopias, epitomized by the postwar architecture of Berlin, which serves as a dreamlike scenography for the main, protagonists’ ghostly actions.

“The work combines glimpses of the future with (unfulfilled) promises of the past. The artist goes through an in-depth process of understanding female-to-male transitioning from psychiatric, linguistic, and medical perspectives.”

The showing at the Hugh Lane Gallery on Parnell Square ends on Sunday. The film series received financial support from the Arts Council and the Edith-Russ-Haus für Medienkunst in Oldenburg.

Ms O’Malley and the other winners, Alanna Lynch and Monika Grabuschnigg, each get a cash prize and a one-month residency in Marrakesh. The Berlin award was open to all artists living in the city.

9 You Exist Too Much: A provocative and insightful debut