The car’s the star: This weeks visual arts highlights 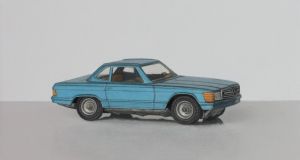 The Past is a Foreign Country – Anita Groener

An installation made up of 20 leafless young birch trees, uprooted and suspended in the gallery, plus a series of drawings and an animated film. Dutch by birth and long resident in Ireland, Anita Groener has in mind people forced by circumstances to become refugees, and the response of those of us who are not thrust into that position.

Benita Stoney’s etchings have their beginnings in the life room, where she draws directly from a model onto the copper plate – apart from the print featuring a rhinoceros, obviously. Her mezzotints relate more to inner life than appearances. Aidan Crotty’s paintings, landscapes and still lifes, low-key subjects, are calm, thoughtfully observed accounts of the domestic spaces and the wider environment around him in West Sligo.

New commissioned work by Clea van der Grijn that will tour five Irish venues. Death and how it is mediated, memory and time are among her concerns. Together with paintings, she has made a film in collaboration with Joseph P Hunt, Michael Cummins and Ciaran Carty. It begins with a woman standing at the edge of a pier, poised to jump.

Glenn Fitzgerald attempts to pin down the elusive “world between worlds or maybe outside of it or under it or in the very distant future or somewhere. Although this world or area is quite dreamy and hazy it can also be very clumpy, with clumpy matter and a dingy atmosphere like a mechanic’s garage.” It’s both familiar, and very strange.

There is an almost surreal aspect to Comhghall Casey’s highly realist studies of everyday things – “vegetables, fruit and children’s toys”. Each item gets a painting to itself, considered in isolation, against a neutral background, as though it is a model in a photographic studio. Casey says he aims to make his subjects “tangible, distinct and convincing”.