The bird man of Westland Row, the movie

A short film about Martin Hart, who has lived on Dublin’s streets for 14 years

Martin is a short documentary about the unusual bond made between its director Donal Moloney and subject Martin. Directed by Donal Moloney 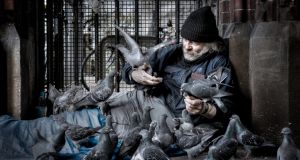 Donal Moloney was driving home in November 2013 when a man appeared fleetingly in his eyeline. He was lying in his sleeping bag under Westland Row bridge, “this Dickensian-type character”.

The man’s name was Martin Hart, and the streets of Dublin have been his home for 14 years. Moloney, a photographer and filmmaker, asked if he could shoot a couple of frames. He’d intended then to move on, but he couldn’t get the images of Hart, who is now 63, out of his head.

“I just found him so intriguing. When I went back I found a man who was very well spoken, with a distinguished accent, and I was even more intrigued.”

Moloney’s photographs of Hart have garnered a growing following online; many visitors are touched by a story unique in its origins, trajectory and beauty.

Moloney has condensed the story of their friendship into a short documentary, entitled Martin, and now published on irishtimes.com. Its nine minutes and 21 seconds are an aperture into a world where every frame counts. The voiceover for the trailer begins, “I think we all have a very private room inside of us that nobody ever sees.” The voice, both strong and tinged with fragility, is Martin Hart’s.

Very slowly, as he gained trust in Moloney, Hart opened a window into his world, while Moloney opened the door into his, inviting Hart to Christmas dinner in his studio that year. When Hart politely declined, Moloney brought Christmas dinner and a bottle of wine to him under the bridge. In the film Hart swirls the wine in its glass, smelling it, appreciating a rare treat.

Hart, viewers will find, is endlessly appreciative of the small things – which to him are not so small at all. Moloney once asked if he had ever had an alcohol or drug problem. “I could have, but I don’t,” Hart said. He does not consider himself homeless.

Since then Hart has always spent part of Christmas Day at Moloney’s former studio, in Portobello. After dinner they might watch a James Bond film. And then it’s time for him to leave.

“I always feel very weird dropping him back to the bridge on Christmas Day, while I go home to my family and he slips back into his sleeping bag,” Moloney says.

“I couldn’t describe unhappiness to you”

What does “home” mean, Moloney asks. “Home is the intellectual capacity to be happy,” Hart replies.

In the whir of early-morning rush-hour traffic, close to Pearse Station, he is at peace, crushing a handful of digestive biscuits for the pigeons, “my little beasts”.

He’ll rise at 10.30am, have a “bit of a wash” in a local church, pack his bags and go to Rathmines library, where he spends up to four hours a day. “There are lots of things to occupy the mind,” Hart says.

He might take a walk around St Stephen’s Green or stop for coffee on Grafton Street. “And then I’ll head home, to Westland Row.”

Hart has been on the streets for longer than most, but Moloney doubts that you could meet a more content man. “When I take him out he observes, touches and sometimes even smells everything around him, like a galactic explorer who has just discovered Earth.”

Whenever Moloney asks if he’d like to go for a drive, Hart’s reply – “Yes” – always comes before Moloney has a chance to begin his next sentence. Then Hart packs all his belongings into a plastic Dunnes Stores bag and asks if Moloney can wait a few moments, so Hart can feed the birds.

“Many of us have a bucket list of places we’d like to visit,” Moloney says. “Many of these places are in exotic locations around the globe. Hart’s list is far more humble.”

When they visited the National Botanic Gardens, in Glasnevin, Moloney stood back and watched Hart’s expressions as he investigated his surroundings.

“He sometimes looks puzzled but more often looks like a child in a sweet shop. His pace is unhurried but comfortable as he negotiates his way through the greenhouses.”

He was touched by Hart’s sense of tranquillity as he sat in the walled garden, “hands clasped on his lap, that gentle warm smile, a sense of peace”.

Moloney marvels, in cold weather particularly, at a man who must have “the constitution of a mountain goat”.

“Your excellent sleeping bag kept me nice and cosy. I slept quite well, actually,” the reply came one winter morning.

Hart remains something of an enigma to Moloney. He is a man who frequently says so little, but what is said – and often left unsaid – speaks volumes.

From Dallas, Texas, Hart moved to Ireland when he was eight. He’s reluctant to reveal too much of himself or his life, taking the view that the closer you get to someone the greater the opportunity there is to be hurt. Moloney has got closer to Hart than most, and even he doubts that he will ever truly know him.

For years Hart spoke of his desire to go to Lough Derravaragh, in Co Westmeath, given his fascination with the legend of the Children of Lir, about the four children turned into swans. When they visited the lake Moloney found it curious that they were greeted by three swans. He let Hart take it all in alone before driving back to Dublin.

There will always be quirks to Hart that Moloney may never understand, such as why he wears two watches on his left wrist. “One is accurate and the other is 2½ hours slower. Time is personal to him. Martin lives in his own time zone.”

And it is there Hart plans to stay, under Westland Row bridge, feeding the birds, he the fourth swan in a world where he is not lost but very much at home.