Kilkenny Arts Festival: a compelling chain of events and emotions

From Antarctica to Ukraine and Schubert to Brexit, a one-day exploration of the festival 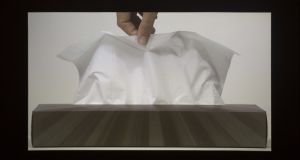 “I’m still not sure I understand the politics,” says an American woman at the cafe table next to me. She’s fresh from a Brexit talk by Downing Street insider Stephen Wall. I’m inclined to agree with her – globally as well as specifically – but there’s more on my mind than what our nearest neighbours are up to.

I’m at the Kilkenny Arts Festival, with a day to explore, from the Antarctic to the Ukraine, and stops for art and music en route.

First stop is Kilkenny Castle, where festival stalwarts Architects of Air have once again erected their epic illuminated inflatable tent-thingy on the castle lawns. They’ve been coming to Kilkenny for as long as I can remember, so I skip it this time in favour of the Butler Gallery’s show. This is an homage to Peter Fischli and David Weiss, creators of the world’s best chain-of-motion movie, The Way Things Go, and it’s a joy to behold. Favourite pieces include Caroline McCarthy’s sublime take on a box of Mansize tissues, and Aideen Barry’s Heath Robinson-esque drawings and projections.

These days the emphasis at the festival is on classical music, and this year it’s a Schubert extravaganza, with a bit of Handel thrown in. I meet a couple on the street who have been soaking it up and are transported. Apart from that, the city appears less en fête than usual, the festival banners mainly absent, and visitor excitement seems focused on Barry Wrafter’s 10-tonne limestone sculpture celebrating Kilkenny hurlers. Unveiled last year, it’s an alarming piece, not least for the set of teeth on the topmost figure.

I pass it en route to see Mick O’Dea, painting the festival great and good for the third year running. You have to admire him, painting in public, and keeping up a stream of fascinating patter as he goes. “I’m always interested in painting from life,” he remarks to the packed room. “That doesn’t mean it’s going to be any better, that’s just how it goes. Alizarin crimson is what I’m mixing now, with ultramarine blue. Anyone here from Waterford?” he adds. “How do you feel?” “Great,” comes the reply.

The National Craft Gallery is showing fashions from Ireland and Japan, spotlit in the darkened gallery. In the courtyard, I call into the craft exhibition from Form, a group of Carlow makers. Emma Jane Champley’s Little Wing collection is a set of strange, feathered silver pieces, with an intriguing backstory. More local shows like this used to be part of the Kilkenny Arts Festival programme, but for the past three years a separate Alternative Kilkenny Arts festival (AKA) has taken up the mantle.

It’s AKA that takes me to Grennan Mill in Thomastown, where Anthony Hobbs’s video Things to look at when your mind is elsewhere is a highlight. Back in town, a game guitarist is singing Whiskey in the Jar to a half-empty Field Pub. It’s just after five, and I’m rushing to catch the exhibition of Mick O’Dea’s previous portraits. They let me peek in, just as they’re locking up. The lights are off, and the faces peer back at me, like the ghosts of festivals past.

A quick sandwich in the wonderful Cleere’s sets me up for Antarctica, David Power and Linda Buckley’s evocative meditation on the icy southern wastes. It’s in the Brewhouse – Kilkenny abounds with atmospheric ruins and former industrial spaces, and part of the joy of the festival has always been discovering them. Inside, the trapezes from Loosysmokes’ Raven Eyed, which will be on again tomorrow, hang in the way, interfering with the underwater acrobatics of the projected marine life. It’s an odd combination, though the music is beguiling.

Then it’s a scamper across town for my final show of the night. I guess it makes sense to stage Counting Sheep in a livestock mart. Anyway, I emerge into the twilight with tears in my eyes and Ukrainian songs of the Maidan revolution in my head. If the politics of Brexit bewilders, those of the Ukraine make you realise how important the stabilising force of Europe might be, if only we could collectively let it.