John Gerrard on sculpting smoke, false flags and how it all comes down to petroleum

The Irish artist's latest, extraordinary work, about the legacy of oil, has been timed to coincide with Earth Day and will be seen by millions 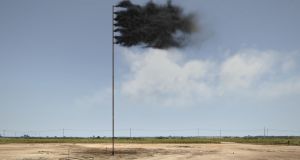 In every era, artists will produce defining works, but John Gerrard has made some of the most extraordinary images I have ever seen. This is the portrait, now in the Arts Council’s collection, that smiles just once a year; there is the huge tree that gently emits carbon dioxide instead of oxygen, seen at the RHA a decade ago; there was the huge outdoor installation at the Lincoln Center that stopped New Yorkers in their tracks. Gerrard’s work haunts, mesmerises and leaves you thinking about the world we live in. A new project, launching simultaneously at Somerset House in London and on Channel 4, is set to bring this Tipperary-born artist’s work to an audience of millions.

Apart from their disconcertingly uncanny beauty and the relevance of their subject matter, what sets Gerrard’s work apart in today’s world is that these moving pieces are not films or videos. Instead, the gently smoking trees (from the series Smoke Tree, 2006) are real-time computer simulations, in which the background changes with the seasons, and the light alters from day to night and back over each 24-hour period. Each time you look, they will never be the same again. The trees themselves are slowly dying according to the lifespan of each species. So if you bought Smoke Tree: Oak, your descendants in 300 years’ time would have an image of a fallen tree, decaying into the ground.

The legacy of oil

Western Flag (Spindletop Texas), which Gerrard will be showing at Somerset House, is a descendant of the Smoke Trees. “Have you ever tried sculpting smoke?” he asks. Of course not, but as we speak I start to get a sense of the complexity he’s dealing with. Together with his Vienna-based team (he divides his time between that city, Dublin, and numerous other stopping points around the world), he has been working on the project for more than a year.

What visitors and audiences watching Channel 4 on April 22nd will see is a lonely, majestic flag on a pole, set in the middle of the Texan desert. The scene rotates to give a full 360-degree panorama, but instead of bearing a nationalistic emblem, the flag is pure black smoke. Gerrard describes Spindletop as the birthplace of the modern oil industry. He shows me a picture of the Lucas Gusher, a Spindletop strike that in 1901 produced more oil per day than the rest of the world’s oilfields combined.

“Western Flag is the legacy of oil. The invisible legacy: unlike most human waste, it’s invisible, and it’s one of the great drivers of the political reality that is climate change,” he says. “The smoke trees were more experimental, romantic, fantastical pieces,” he adds. There’s been a change in his outlook and art over the past number of years.

Gerrard grew up in a highly creative family of seven, just outside the village of Coolbawn in Co Tipperary. His sister Joy is an artist too. Years ago, before NCAD and Oxford’s Ruskin College, and a master’s in multimedia at Trinity, he would make jewellery for his sisters and friends in one of the outbuildings at home, from bits and pieces found about the place. After art college a 2002 residency at the Ars Electronica Futurelab at Linz in Austria helped him push his thinking beyond the “look at what I can do with new technologies” aesthetic that makes so much computer-generated art so disappointing. In 2003, after his younger brother died, his work began to be concerned with holding time. Mary, the subject of A Portrait to Smile Once A Year, will never grow old.

His medium is also an influence. He uses military and computer gaming technologies. (“Many drone pilots came from the gaming industry,” he says as an aside.) This type of work calls for a meticulousness and precision that is either informed by, or bleeds into the rest of his life. His Dublin apartment is pared-back and incredibly beautiful; objects are carefully chosen and placed. You suspect that biscuit crumbs and teabags dripping in the sink might pain him, but he’s also brilliant fun, one of those charismatic people who draw you along into devilment in their wake – and it’s quite a wake, as his career has become stratospheric. His works are now in the permanent collections of the Tate, the museums of modern art in both San Francisco and New York, and the Los Angeles County Museum of Art (Lacma).

Leonardo DiCaprio encompasses the contradiction of living now – he has a mobile, all that, and he cares about the environment

His 2014 installation Solar Reserve, at the Lincoln Center in New York, was one of those works where you expect to sit for 10 minutes, and leave, mind blown, hours later. Installed on a massive outdoor LED wall, the scene could appear to be footage of the hajj, the annual Islamic pilgrimage to Mecca. Instead it’s a simulation of a solar thermal power plant in Nevada, in which a central tower is flanked by mirrors, tipping to catch the sun. Leonardo DiCaprio purchased the work to donate to the museum. The actor will also be getting involved, via social media, with Western Flag. What’s he like? “A dude,” says Gerrard laconically, adding that “He also kind of encompasses the contradiction of living now – he has a mobile, all that, and he cares about the environment”.

Gerrard has a profound ability to make work that connects directly to current concerns without being glib or opportunistic. Farm (2015), which showed at his London gallery, Thomas Dane, was another real-time simulation, this time of a Google data farm in Oklahoma. Gerrard had become interested in the idea that the internet was a real thing, not the ethereal “cloud”. When he asked Google if he could film there, it said “Absolutely no way”. So he asked the local police what the policy about filming from the air might be. Thousands of photographs taken from a helicopter later, Farm shows how the internet is real, physical and very industrial, with data stored and analysed – in other words, farmed. “It was the artist snooping on Google, rather than the other way round. It got a lot of press,” says Gerrard.

The commissioners at Channel 4 saw it, and so the Western Flag project was born. Gerrard describes oil as a “dynamic that allowed for a very particular change in society, allowed for hyper-mobility, changes in food and agriculture. Much of what we think of as ‘real’ is a petroleum reality. Heat, comfort, mobility, it all comes from petroleum.” Add to this the image of the flag, and the work becomes more complex. “You can have a lot of diverse opinions within a nation state, but unless there’s a profound fracture you have the unifying emblem of the flag. That centre is being rigorously and visibly challenged by the migration crisis, which is also driven by climate change.”

The simulation will run at Somerset House for a week. The difference between film and what Gerrard does is important to him. “This piece may look like cinema, but it’s not, it’s military simulation: the first Sims were battlefield simulations. At some point in the 1980s the game engine became commercially popular, but even something like Pong is a version of a flight simulator,” Gerrard says, warming to the technological details that add their own layers of meaning.

With his ability to create works that attract audiences beyond the art world with their scale and beauty, before seducing you to think about the concerns they embody, what Gerrard’s art can do is make space for vital conversations. “The greatest potential of the artist is always to have a voice, and the choice is where one speaks. The role of the artist is to seed, not so much solutions, but anxieties, more strangeness. The flag in this piece is an anxious object. I’m interested to underline that the great ‘waste’ material of 20th century expansionism is carbon dioxide. This flag tries to recall that legacy and give it an ‘image’.”