The sound and fury of Australia’s remote outposts

Ten years ago, a report on the treatment of Aboriginal communities drove Robert Curgenven to leave his native Australia. His last show attempts to capture that history 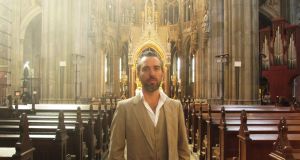 When you enter CIT’s Wandesford Quay gallery in Cork, there is a maze made of black fabric. Inside the maze, voices speak over one another: tongue-twisters spoken by 60 different people, in 30 different languages. The voices emerge from speakers hidden within the convolutions of the maze, always surprising, utterly unfollowable. It’s a quick way to get lost.

The voices were recorded by Robert Curgenven, an Australian musician and artist who has been living in Cork for the past two years. The exhibition at Wandesford Quay, titled Locate Yourself, is his first major solo show in Ireland. The exhibition consists of multichannel audio/visual pieces embedded within different parts of the gallery.

In the crypt, a subwoofer blasts waves of bass against the stone walls, which are decorated in illustrations of imagined dystopian architecture. Across the hall, an interactive installation featuring recordings made in 15 different “skyspaces” – architectural light installations created by American artist James Turrell. Click the iPad and the speakers spring to life with a single tone from each space, allowing you to layer and compose them as you wish.

Curgenven came to Cork after spells in Cornwall and Berlin, with a back-catalogue of records that hover between ambience, drone, and noise, where field recordings are layered with the resonances of pipe organs, guitar feedback, and turntable manipulation. These are patient records, which demand a degree of patience and concentration from their listeners.

Like buildings, they do not reveal themselves all at once. Curgenven’s fascination with the sculptural, spatial quality of sound goes right back to his childhood in Sydney: he started playing his parents’ Hammond organ at the age of seven, and quickly learned how to manipulate its many keys and sliders for a pleasing effect.

“When I was eight, I took a plate off the shelf in the next room by playing with the bass,” he says, laughing. “So this idea that sound is physical was embedded from a very early age.”

After leaving Sydney in the mid-1990s, Curgenven spent some years in and around Alice Springs, a remote town in Australia’s Northern Territory surrounded largely by desert. The experience has significantly shaped his artistic practice ever since, with the influence of those wide-open spaces, the music and culture of the Aboriginal communities, and the squalid history of settler colonialism all filtering into his work.

Within Locate Yourself, these issues come together most powerfully in apiece titled They Tore The Earth And, Like A Scar, It Swallowed Them. This 20-minute film began life as a purely musical project, with a record of the same name released in 2014, but the addition of visuals from the Australian outback takes the work to a new level of intensity: one that reflects the circumstances in which the footage was captured.

“We basically drove 5,000km in 10 days, in 40-degree heat,” says Curgenven of the shoot. “The first day was 1,000km, and we went to Lake Mungo. I’d never used a camera before. We filmed there for a day and a half, and we were shooting 1,000km away on a salt lake the next afternoon. It was all very precisely organised so we could get the right light everywhere. Some of those places were a couple of kilometres down the road from where I used to live. One remote Aboriginal community, a couple of national parks. Very remote areas.”

They Tore… is a dark meditation on the relationship between these remote places and the colonists who came to claim them. Curgenven evokes the violence of the settlers, the unforgiving nature of the landscape, and the indigenous people caught between the two, through the roving camera – kept low to the ground – and the swelling of pipe organs, guitar feedback, and deep, detailed field recordings he had made years before, while still living “out-bush”.

Curgenven is clear that the dynamics of settler-colonialism are not simply historical, but persistent in Australian society today. The exhibition’s supporting materials include a 2007 report by the Australian Human Rights Commission on treatment of Aboriginal communities in the early years of the last decade: a report which, Curgenven says, made him book a one-way ticket out of Australia 10 years ago.

“This is pretty much one reason why I got the exhibition; so I can articulate certain things to people in a political way, but using artistic means so it’s not so didactic,” he says. “ If we are to change things and break things apart, we have to be educated on what’s already happened, to be able to lay the road for what could happen, in a more positive sense in the future. You can’t just tear it all down and start again. You need to have a point to start from.”

For Curgenven, that point is typically understood through sound. Listening to him speak, sound-based terminologies like compression, distortion, and bandwidth leak out of one thought and become metaphors for many different aspects of life in another. Politics, relationships, and the weather all become embroiled in his linguistic feedback loop. And underneath the abstract instruments, the base layer of field recordings patiently captures that phenomenon which seems to excite Curgenven more than any other: the movement of air.

“Living in the tropics, the air, my god, the thickness of it!” he says, wide-eyed at the memory, so distant on this drizzly afternoon in Cork. “How much it just oppresses you sometimes, and then when it rains, how much it moves, and these massive temperature shifts. Having something so in your face; I can’t believe it took me that long to understand that that was the thing I was most interested in. But then, how to articulate that, aesthetically or experientially, creating something that feels like this?”

Locate Yourself sets out to answer this question through the exploration of boundaries; places where one thing blurs into another, where one kind of logic may become interweaved with a different order of sense entirely. Curgenven sees these boundaries less as borders, and more like the “limit of a definition”.

Whether it’s in Cornwall, where land ends, or in the Red Centre of Australia, where it seems like land might never end, such perceptual frontiers are contested, contingent spaces, areas of diversity and unpredictability. For Curgenven, these edge-lands are ideal places to explore the boundaries of our cultures, our senses, and ourselves.

“It’s only by approaching the extremes that we’re going to learn those things,” he says. “It’s not about extremes all the time, but I think if everything gets too bandwidth-compressed then we lose our ability to empathise and discuss things out of our immediate sphere of experience. Societies seem to function best when they’re comprised of diverse communities, and often community and society are inter-substitutive when they’re operating at radically different scales. So keeping the diversity in there and allowing it to produce these proliferations of borderlands. Sometimes it’s uncomfortable, but then sometimes you realise it’s your perception that’s causing the problem. You get over that and then everything is fine again. We’ll get there eventually, hopefully.”