From linotype to letterpress, the joy of hands-on printing 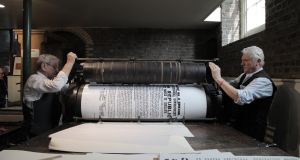 Steven Spielberg’s film The Post is a forthright statement about the importance of journalism, with particular contemporary urgency, but its exciting portrayal of smoky 1970s newsrooms and the heat and noise of hot metal newspaper production is more than just nostalgia.

The loving recreation of the old printing presses for the film – the production designer located linotype machines still in use in Brooklyn for the scenes – seems to have picked up on a renewed interest in old tech printing, from linotype to letterpress.

Last month’s Printfest at the National Print Museum in the former Beggars Bush Barracks on Haddington Road, Dublin, was proof of some of that renewed interest. The museum has seen an increase in visitors generally and for its workshops (its extensive range of print classes includes Mokuhanga Japanese woodblock print, screen printing, intaglio, calligraphy, medieval bindings, and linocut).

Museum chief executive Carla Marrinan detects a “digital fatigue and a yearning for the hand’s involvement in design and craft, and the idea of going full circle – from craft to technology and back again”. Its collection is not behind glass or rope, but working letterpress printers, displayed and organised like a traditional 1960s print-shop.

As part of Engineers’ Week, the museum’s Printfest brought some of its old, pre-digital printing machines to life, transforming the museum into a printshop. Retired compositors Harry Havelin, Brendan Murphy and Peter Fitzgerald showed visitors the linotype machine – which sets rows of letters in hot metal – in action. On the museum’s Wharfedale Stop Cylinder Press, Alfred McCormack, Freddie Snowe, and William Ryan were printing full size replicas of the 1916 Proclamation – the impressive machine was a sight to behold.

As well as weekly opening hours, the museum has regular open days to show off the machines in operation, and its exhibition about Irish suffrage, Print, Protest and The Polls, which opens on May 16th.

There'll be no Bauhaus in this White House
9