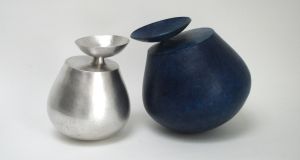 The three artists who will share this year’s Golden Fleece Award, worth €30,000, were announced at a ceremony in the RHA, Dublin on Thursday. They are Ursula Burke, who works primarily with porcelain, painter Paul Hallahan and metalsmith Cecilia Moore. Each receives €10,000. The award is open to artists and craftspeople, and the trustees say that this year’s competition attracted a record number of entries. The winners were selected from a shortlist of six. Also shortlisted were ceramicist Magda Bethani, painter Damien Flood and jeweller Natasha Rollinson.

Established by Helen Lillias Mitchell, until last year the Golden Fleece Award was confined to craft and figurative art. That was amended to embrace “all forms of visual, craft and applied arts”. Mitchell’s life spanned the arts and crafts. Besides being highly capable as a painter and sculptor, she was a weaver who specialised in traditional techniques. The award takes its name from the emblem she devised for the weaving workshop she founded in Dublin in the late 1940s. She set up the weaving department at NCAD in 1951 and taught there until her retirement. When she died in January 2000, she bequeathed a fund for the Golden Fleece Award.

In her porcelain and fabric sculptures, Ursula Burke surveys contemporary political and social realities, including post-peace process Northern Ireland and racial tensions in the United States, by critically revisiting classical and traditional cultural forms in art and craft. There’s a utopian cast to Paul Hallahan’s work, which evokes 20th-century colour field painting with an eye to contemporary circumstances and social and political aspirations. Cecilia Moore has revived “raising”, a technique of making three-dimensional sculptures by hammering sheet metal.