Tom Hanks is stubborn, Meryl Streep is vulnerable, the whole film is elegant 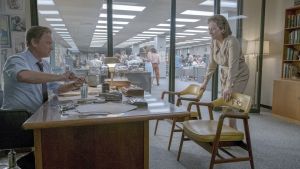 The rapid delivery of Steven Spielberg’s latest irresistible entertainment was almost as startling a feat as the insertion of Christopher Plummer into All The Money in the World. At this time last year, the great man was set to begin an entirely different project. Trump arrived, behaved more appallingly than expected and Spielberg brought forward his study of the Washington Post’s engagement with the Pentagon Papers.

Events unfold while a demagogic president fumes crazily in an unhappy White House. The freedom of the press is questioned. The position of women in power structures is investigated. “The press is there to serve the governed, not the governors,” somebody says.

No wonder Spielberg felt the need to rip a story from headlines first published in 1971.

There are a few clunks along the way. A moratorium should be placed on the playing of Creedence Clearwater Revival beneath any Vietnam footage (at least it’s not Fortunate Son).

State Department analyst Daniel Elsberg (Matthew Rhys) does talk us through the papers – which reveal the state’s shady escalation of that conflict – while passing them across the photocopier. But, for the most part, The Post is an elegant, efficient analysis of complex material. Few other directors could turn a tanker round so quickly.

Though sniffy contrarians further up the eastern seaboard have implied otherwise, The Post does make it clear that the New York Times was the first to get the Papers into print.

Aware that further scoops are on the way, Ben Bradlee (Tom Hanks), the Post’s soon-to-be-legendary editor, encourages assistant editor Ben Bagdikian (Bob Odenkirk) to track down the source of the State Department leaks. He meets Elsberg in (where else, conspiracy fans?) a seedy motel and takes delivery of the mountainous document haul.

But the courts are circling. Katharine Graham (Meryl Streep), the paper’s owner, must decide whether to risk her prime asset and publish.

Scored to characteristic swells by John Williams, shot in blue-greys by Janusz Kaminski, The Post is in constant conversation with events in the near and distant future (what we now call “now”). Though the Pentagon Papers largely implicated the previous administration, Richard Nixon’s looming presence offers unmistakable shadows of the coming Trumpocracy.

The film also cannily gestures towards the scandal that brought down Nixon and towards the film that told the paper’s involvement with that story. “I don’t think I could live through something like that again,” Graham says just months before burglars break into the Watergate Complex.

Tom Hanks is as stubborn as Jason Robards was in All The President’s Men, but, because he’s Tom Hanks, his Bradlee is that bit less frightening. The film does raise an interesting question about the differences between then and now. Why does contemporary cinema, when telling such stories, feel the need to put all the actors in wigs and prosthetics? For All the President’s Men, Alan J Pakula just hired actors who looked a little like the real people and gave them sports jackets.

No matter. Streep finds humour and vulnerability in a woman who isn’t taken seriously even within an institution she owns.

It’s startling to observe that – a practice already abolished in all but the creakiest English households – “ladies” still left the men with their cigars at the end of a DC dinner party. When Graham has to make her final decision, Spielberg and Kaminski arrange a stole of shirt-sleeved men about her worried shoulders.

The preceding deliberations play out as a tight chamber piece in Bradlee’s capacious town house. The tensions wind up deliciously as we work our way to a penultimate celebration of a now-imperilled medium.

Any visitor from 1971 would wonder at the fetishisation of print that takes up much of the last few minutes. The hot type is set. The newsprint rolls massively through enveloping machines. He or she might also wonder at the point of the cheeky closing shots that follow.