Show me the Monet: Banksy comment on consumerism fetches £7.5m 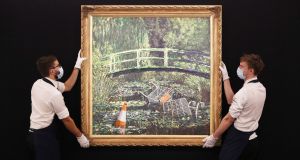 Show Me The Monet was created in 2005 and adds abandoned shopping trolleys and a traffic cone to the famous garden scene.

It was sold at a Sotheby’s event in London on Wednesday following a near nine-minute battle between five collectors, the auction house said.

The painting is the second most expensive Banksy sold at auction, after the reclusive artist’s Devolved Parliament sold for £9.9 million last year.

Show Me The Monet forms part of a series titled Crude Oil, which “remixes” canonical works.

Alex Branczik, Sotheby’s European head of contemporary art, said: “In one of his most important paintings, Banksy has taken Monet’s iconic depiction of the Japanese bridge in the Impressionist master’s famous garden at Giverny and transformed it into a modern-day fly-tipping spot.

“Ever prescient as a voice of protest and social dissent, here Banksy shines a light on society’s disregard for the environment in favour of the wasteful excesses of consumerism.” – (PA)