Visual art review: Abbas Akhavan’s show looks half made before it reveals its mysteries 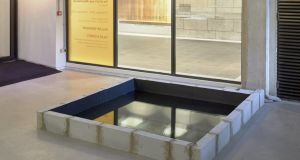 Visit Abbas Akhavan’s Variations on a Garden  at the Douglas Hyde Gallery and you could be forgiven for thinking that you have just missed the exhibition, which is in the process of being dismantled: in the entrance hallway, raw concrete building blocks arranged in a square support a sheet of water-filled pond liner and, downstairs in the main gallery space, numerous fragmentary piece of bronze are laid out on white cotton sheets on the floor.

That pool of water was, presumably, the promised Fountain, just as the bronze fragments could have been parts of the disassembled Monument. But then, Akhavan does title the show a Study, so perhaps it is all just that: a sketch for someting forever unrealised.

Akhavan’s work work is ambiguously situated in an imaginative space that is both before and after. Yes it might be a preparatory draft or a work-in-progress but the feeling it imparts of an aftermath, even an excavation, is more persistent and a little troubling given the suggestion of a calamity or a crime. Those bronze fragments laid out on the sheets are obviously organic. Unevenly coloured, blotchy, scorched, torn, with white material lodged in their surface fissures, they are a long way from polished, patinated bronze sclupture.

He looked for plants native to a particular region in Iraq, the confluence of the Tigris and Euphrates

If you weren’t told they were bronze it probably wouldn’t occur to you that they are. Rather, they recall the partial reconstructions of skeletal remains for forensic examination.

That is pretty close to what is going on in Akhavan’s work. Most of the forms are sculpted from a plant archive in the Royal Botanic Gardens at Kew. This ambitious project, The Flora of Iraq, begun in 1960, is still under way and will eventually incorporate more than 3,300 plants. He looked for plants native to a particular region in Iraq, the confluence of the Tigris and Euphrates.

This was, reputedly, the site of the Hanging Gardens of Babylon and, in actuality, where Saddam Hussein “recreated” the vast palace of Nebuchadnezzar II as a symbol of Babylonian resurgence during the Iran-Iraq War. It was to no effect: Iraq was defeated. When Shia rebels retreated to the river marshlands, Hussein vented his fury on the hapless Marsh Arabs and others who were sheltering there, killing and displacing the people and destroying the habitat.

Akhavan was born in Tehran a few years before Iraq embarked on its disastrous war with Iran. When that war ended in the late 1980s, Akhavan’s family moved to Canada. He went on to study art, first in Montreal, then completing an MFA in Vancouver. Since then, he’s enjoyed considerable success as an artist, winning several awards and achieving visibility internationally. His work spans installation, drawing, video and performance, always with a precise conceptual rationale.

Through the diversity of his output – from an audio installation of recorded birdsong to a hedge of closely packed cedar trees forming a barrier in a gallery space – there are some consistencies. One is certainly the elegiac, almost mournful quality that comes through in the Douglas Hyde. A 2014 installation in Montreal, titled Fatigues, located the taxidermied bodies of roadkill animals, and birds that perished by flying into windows, throughout a gallery space. More generally, Akhavan focuses on domestic spaces, inside and out (rooms and gardens, say), as potentially hospitable or hostile.

His preoccupation with unease and displacement is not obviously related to his own experience – assuming, of course, that his family’s relocation from Iran to Canada was as relatively untroubled as it seems to have been, at least by comparison with the unending tide of migrant horror stories. Yet the transient, unsettled nature of his work, strongly evident throughout variations on a garden, suggests deep-seated uncertainty and doubt.

The Flora of Iraq project that furnished Akhavan with his plant forms was suspended in 1985 during the war. It finally resumed in 2012. Having found the relevant species of woodruff, delphinium, ornithogalum and more, Akhavan modelled them in plasticine, but on an enlarged scale. They were then “cast into wax, encased within plaster, melted, cast into bronze and then charred”. Some pieces retain formal coherence but mainly they come across as broken, injured things, plant bodies standing in for human bodies.

The Douglas Hyde’s Gallery 2 usually features a show complementary in some way to what’s on in the main space. Now the policy is that artists showing in Gallery 1 will be asked to invite an artist who influenced them to exhibit. Akhavan nominated Mona Hatoum. Born to a Palestinian family in Beruit, Hatoum moved to London at the outbreak of the Lebanese Civil War in 1975. She shows a short video of a performance piece from 1985 as part of a project called Roadworks (also the title of her video). In Brixton, clad in black but barefoot, she walks slowly along the rough pavement, dragging a pair of substantial Dr Martens boots behind her, each tied to an ankle.

Observers are bemused and often amused. She even shares the joke at one point, though her demeanour is generally serious. It’s a good fit with Akhavan’s unsettled, unsettling work.