Ariana Grande: Moving out of the darkness with the hits

Her first release since the Manchester bombings, this song sees Grande on the far side of grief 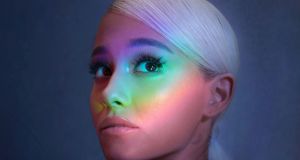 Ariana Grande: perfection is about to be reshaped.

“Right now, I’m in a state of mind I wanna be in, like, all the time. Ain’t got no tears left to cry,” sings Ariana Grande on her latest single No Tears Left to Cry and, as the one year anniversary of the bombings at her Manchester Arena gig looms, Grande possesses a poignancy made out of steel while delivering one of the top jams of the year.

Grande has always been a favourite. From the second she swung her ponytail into the music scene with that four-octave range of hers in 2013 – for reference, Whitney Houston had a three-octave range and Mariah Carey has a five-octave range – to the minute she dropped the iconic, Ilya and Max Martin-produced Into You in 2016, a song that makes dance floors ascend time, space and any regular human dimensions. Into You is a perfect song, equipped for clubs or 5am parties in a kitchen but with this taster of the new era of Grande, perfection is about to be reshaped. Like a Trojan pony, tiny in size but with great power that lies within, Grande is now chart royalty and a top contender for our VBF. Like, VVVBF.

Teaming up with Ilya and Martin once again and earning a co-write on the credits, there’s more to her latest single than you’d think. The power of No Tears Left to Cry is that it starts off with the typical balladry for a chanteuse like Grande but the tempo suddenly changes, infusing disco rhythms with UK garage beats. With the same sentiment that Gloria Gaynor sang I Will Survive in 1978, Wilson Philips sang Hold On in 1990 and Britney Spears sang Stronger in 2000, Grande pushes defeat aside and conquers. Her first release since the Manchester bombings, this song sees Grande on the far side of grief.

When you can no longer cry, you have to find a way to move on and for anyone who was at the concert or lost someone on that day, there’s something to latch onto here. In the sheer horror of a terrorist attack like this, it’s impossible to know how to carry on but Grande is setting an example.

In the aftermath of the suicide bombings in Manchester on May 22nd, 2017, where 22 concert goers of all ages and parents waiting to pick up their kids died, Grande has proven time and time again that she is an act of sheer class. The most notable example is the One Love Manchester benefit concert on June 7th – two weeks after the attack – which raised £10 million (€11.4 million) for victims and their families. The 24-year-old rallied in help from Miley Cyrus, Little Mix, Niall Horan, Pharrell Williams, Take That, Katy Perry, Liam Gallagher, Stevie Wonder and her boyfriend Mac Miller, among many, many others, to perform at the Old Trafford Cricket Grounds.

While there were tears, extended but necessary hugs and moments of heartbreaking reflection on the BBC broadcast, before singing Side to Side, Grande mentioned Olivia Campbell, a 15-year-old fan who died, and said: “I had the pleasure of meeting Olivia’s mummy a few days ago and I started to cry and gave her a big hug and she said stop crying, because Olivia wouldn’t have wanted you to cry. And then she told me Olivia would have wanted to hear the hits. We had a different show planned and we had a rehearsal yesterday and we changed everything.” To move out of the darkness, Grande knows that we need the hits and that’s exactly what she’s doing. Grande’s fourth album Sweetener is set to be released later this summer.

The Music Quiz: What song did the BBC say was 'too depressing' to play?
7