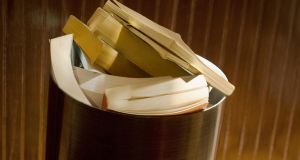 Last week British newspapers reported that, in order to save money, some BBC Radio 4 presenters had been advised that it was no longer necessary before interviewing authors to have read their books. As part of a drive to reduce staff, managers had also suggested that programme producers should just use the cover blurbs of their guests’ books to research interview questions.

If true – and it hasn’t been denied – this Alan Partridge-esque antipathy to opening a book (such a waste of time and money!) may be a grim sign of the times for the BBC, but it’s nothing new for other, less well-resourced broadcasters.

In Ireland, if you listen to the big-name daytime talk programmes on our national radio stations, you won’t have to wait very long to hear an interview with an author. Book interviews are a staple of these shows’ editorial mix – heavy on the current affairs, a bit of lifestyle on the side, regular slots for sport and business, and (usually towards the end) a bit of chat about culture and entertainment.

Apart from the blandness of the format, there’s also a dispiriting cookie-cutter feel to all these segments. And with books, in particular, there’s a strange stiffness of tone. Questions sound as though they’re being recited from a list rather than forming part of an organic conversation. There’s rarely much scope for surprise or real debate.

It’s possible, of course, that this is because the presenters are bored by the subjects under discussion or just not very good at their jobs. But a more plausible explanation is that they haven’t seen the book and are working from a crib sheet prepared by a programme researcher (who has in turn probably only skimmed the thing) and handed to them two minutes before they went on air. There are a couple of exceptions to this rule (take a bow, Ryan Tubridy), but these only serve to highlight the broader issue.

Faced with shrinking revenues and digital disruption, radio, like other legacy media, has tried to keep up a public pretence that nothing has changed while hacking away quietly behind the scenes. Newspapers are pretty much the same size they were 15 years ago and radio programmes still fill the same amount of airtime (or even more, with drivetime programmes swelling up and spilling out across the daily schedule). Media managers may clap themselves on the back for having successfully followed the textbook business strategy of turning a crisis into an opportunity, increasing productivity and reducing costs. But as the programmes keep getting longer and the resources keep getting slimmer, the threadbare reality becomes harder to conceal.

I’ve become more aware of this in recent years while interviewing authors for podcasts. It’s not unusual for an interviewee at the end of recording to say how unusual it is to have a discussion with someone who actually appears to have read the book.

Does this matter? After all, authors and publishers are usually happy enough with the media exposure. The programme-makers have filled some airtime cheaply. Nobody got hurt, apart from you, the listener. If it’s impolite to your neighbours to show up at your local book club without having bothered to read the novel under discussion, surely it’s equally disrespectful to your listeners to do the same. In fact, it would be more honest, more credible and above all more interesting if interviewers took their cue from Tommy Tiernan and just admitted from the start that they hadn’t a clue what they were talking about or who they were talking to. That at least would offer the potential for an interesting discussion.

All this forms part of a broadcasting culture that oscillates between Punch-and-Judy-style manufactured controversies on the one hand and uncritical puff pieces on the other.

I find most Irish talk radio unlistenable these days, a succession of 10-minute “items” sandwiched between ads, traffic, weather and mind-numbingly repetitive news bulletins. In contrast, podcasts offer an opportunity to listen to intelligent, in-depth conversations on pretty much every subject under the sun, at a time and pace of your own choosing.

In a world where traditional media is spread increasingly thinly across multiple platforms (the BBC cutbacks were blamed on the need to reallocate money to the broadcaster’s new BBC Sounds app), print and broadcast organisations will soon be faced with some unpalatable decisions. Do they keep covering up the cracks or do they decide to focus on quality? Are there things they should just stop doing in order to focus on what’s important? Could it be that it’s worth taking the time to actually sit down and read the book after all?