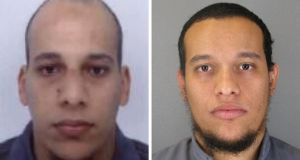 The men who commit public atrocities have very probably practised their terrorism at home first. Photos of the two brothers responsible for the bloody massacre at the Charlie Hebdo magazine in Paris in 2015. Photograph: French Police/AFP/Getty Images

Joan Smith’s new book is powerful and shocking. Researching it must have been a journey through hell – in her acknowledgements she thanks the friends who supported her “when the weight of the material was almost too much to bear.”

The violence perpetrated by men against women with whom they are in, or were in, intimate relationships, is at epidemic level and ought long ago to have been recognised as a global crisis requiring a wide range of urgent and sustained interventions. This violence may be sexual, physical or psychological, and often it is all of these. It creates terror but is not recognised as a form of terrorism. According to the British Home Office, two women a week are killed by their partner or former partner in the UK. Others are killed by sons. Some men kill their entire family, and some of these men then kill themselves. Many domestic abusers terrorise, injure and psychologically maim partners and children. Yet half of the domestic abuse related crimes reported the police do not even result in an arrest.

Evidence of the extent and gravity of domestic violence is produced, noted, and then it vanishes again, to be greeted with surprise when it reappears. As Mary Beard and other feminist scholars have noted, feminist analysis of male violence, however compellingly it fits the evidence, is more often than not disregarded. Smith proves again and again that this refusal to accept the evidence and recognise what domestic violence actually means as a force within society, also means that we are vulnerable to other types of male violence, including suicide bombings, terrorist attacks and mass shootings.

The book begins with a quote from Nazir Afzal, former Chief Crown Prosecutor for the North West of England : “There was research in the 1980s...the number one finding was that the first victim of an extremist or terrorist is the woman in his own home. We’ve forgotten that. We haven’t built on that.” “Home Grown” provides irrefutable evidence based on researching the histories of many mass killers, that the men who commit public atrocities have very probably practised their terrorism at home first. It also suggests that the lessons that should have been learned in the 1980s are still being resisted today.

When I worked in the Rape Crisis Centre in Belfast in the 1980s, we were shocked by the level of demand for our services, though we already knew from Women’s Aid that there was a high level of domestic violence in the North. We were also eager to let more women know about us and to educate the world about the pervasiveness of this “other” violence that was going on largely unremarked in the midst of the Northern Irish conflict, sometimes known simply as “the violence”. So when we’d get calls from journalists we did our best to co-operate with them. Mostly this worked well.

However, some reporters found us disappointing. These were the ones who thought we were a kind of mail order service for victims, ringing in confidently asking if we could put them in touch with a Catholic woman who’d been raped by a member of the security forces, and, sometimes, as if to complete the matching set, a Protestant woman who’d been raped by an IRA man. We would take a deep breath and tell them that while we did know of some instances of this kind, the vast majority of the rapes we were hearing about were committed by a man or men known to the woman, including men who were armed either as members of the security forces or paramilitaries. They used their weapons and their status to prey upon women in their own families and communities. This evidence did not fit the preconceived narrative, and some journalists simply refused to accept it.

Leaders of extremist movements and groups have, in effect, “weaponised misogyny”

Smith notes that in 2017 she met with one of the UK’s most senior police officers, and asked him if he’d noticed that the London and Manchester terrorist attacks had all been carried out by men who’d abused women. He was suprised by her question and told her “the connection had never come up, not even once, in any of the discussions he’d had over many years with experts on terrorism.” After their conversation, he went looking for data. There was none to be found. While writing her book, Smith checked again. Still no data. There are countless books about terrorism, she points out, but the term domestic violence will not be found in the index and nor will the word misogyny. (While checking this out in your local bookshop, pick up a copy of Caroline Criado Perez’s brilliant “Invisible Women” which maps out the general dearth of data related to women’s experiences and needs.)

“Home Grown” explores the history of men like the Kouachi brothers, perpetrators of the Charlie Hebdo massacre in Paris, Khalid Masood who mowed down pedestrians at Westminster bridge and killed a police officer, Darren Osborne who attacked worshippers at a London mosque, killing one man and injuring others, Omar Mateen who carried out the massacre of 49 people at a gay club in Orlando, Thomas Mair who murdered MP Jo Cox and many others.

Again and again she finds that these men witnessed or were victims of male violence as children (she makes clear that many men who have such childhood experiences do not become violent), or had been violent to their mothers, wives, girlfriends or sisters, or left women they had abused to raise children they fathered, or expressed contempt and hatred of women - or all of these behaviours. Some used steroids to hype up their sense that masculinity is the ability to inflict violence and overpower others. All, she says, “displayed symptoms of insecurity, resentment and rage before they turned to terrorism. The extremist ideologies they adopted were used to justify turning their private violence loose in the public sphere. Leaders of extremist movements and groups have, in effect, “weaponised misogyny” to get recruits who are already de-humanised.

“Home Grown” is a chilling read. It is also a call for urgent action: domestic violence must be faced and tackled as seriously criminal behaviour, for all our sakes.

Susan McKay was a founder of the Belfast Rape Crisis Centre. Her books include Sophia’s Story and Without Fear, both about male violence against women and children