9 to 5: The original girl power movie as barbed as ever 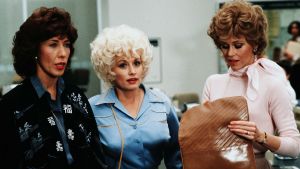 The nightmarish capitalist scenario depicted in Dolly Parton’s theme song – “Working 9 to 5/ What a way to make a living” – must now sound like a utopian fantasy to zero-hour contracted millennials. Only 9 to 5, you say?

Next month marks 37 years since the release of this knockabout feminist comedy, which went on to become the second biggest film of 1980 (The Empire Strikes Back nabbed the top spot).

Reissued as the centrepiece of BFI’s Comedy Genius blockbuster season, 9 to 5 retains a barbed relevance beneath its capering and unflattering hairstyles, not to mention one of cinema’s most badass trios.

Lily Tomlin plays Violet Newstead, a hardworking widow with four kids, who has been repeatedly passed over for promotion in favour of mediocre men. Jane Fonda is the mousy Judy who returns to employment after her husband runs off with his secretary: years of married isolation have left her ill-equipped for the workplace and for the larger world. Dolly Parton is a sweet secretary who is relentlessly pursued by her “sexist, egotistical, lying, hypocritical bigot” boss, Franklin Hart Jr, played to delightfully slimy effect by Dabney Coleman.

After a particularly hard day at the office, the female triumvirate bound over alcohol and weed and share fantasies about getting revenge against their awful superior. Shenanigans, including rat poison and a botched kidnapping, ensue.

The resurfacing of the film – and news of a sequel – has inspired no little debate around its feminist credentials. It’s not a new discussion. As the film debuted, Pauline Kael objected to a scene wherein Parton waves a gun at her boss and threatens to turn him “from a rooster to a hen with one shot”.“Didn’t any of the feminists involved with this project register that a castrated rooster is a capon, not a hen, and that this joke represents the most insulting and sexist view of women?” asked Kael.

Perhaps. But there’s something irresistible about the sisterly bond at the heart of the film. Fonda, who developed the film through her own production company, was inspired by the work of Karen Nussbaum, an anti-war activist and the founder of 9to5, an organisation advocating for working women.

The sexist antics and policies of the villainous Franklin are fascinating – and pertinent, alas – to observe from the era of Me Too and class actions against Harvey Weinstein.

The model of intersectionality and unionised labour that the women usher in – flexible work hour policy, maximum paid leave, in-house daycare, substance abuse and addiction counselling, and make new hires that are diverse in race, gender, and physical ability – makes for the happiest possible ending. Well, except when Sterling Hayden, playing the company chairman, eliminates equal pay. A warm, funny reminder that there is a power in a union.

Sufjan Stevens: ‘We didn’t just wake up with a celebrity president. It was cultivated’
10