‘Whitey’ Bulger and the queasy celebration of notorious thugs

‘Whitey’ Bulger, like the Krays, Ned Kelly and the General, is idealised in film 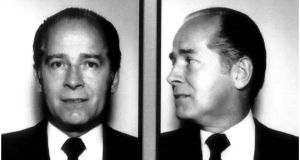 Arrest mugshots of James “Whitey” Bulger, the late mobster who terrorised south Boston in the 1970s and 1980s. “Black Mass” and “The Departed” drew glamourous versions of his character.

In a better world, we’d eulogise only the virtuous. We’d make films about philanthropists, anti-poverty campaigners and people who rescue kittens from trees. Humans do that a bit. But they also exhibit an apparently unstoppable desire to celebrate criminal maniacs. Punch Maurice from HR at the Christmas party and you’ll quite rightly be expelled from the fantasy football league. Arrange for the torture of a dozen shopkeepers who refused to pay protection money and you’ll find yourself played by Michael Caine in an awards season release.

James “Whitey” Bulger has died in prison at the age of 89. The Irish-American hoodlum stopped more than a few of his fellow Bostonians from getting anywhere near that great age, but he still managed to become a sort of folk hero.

Johnny Depp gave him a sinister charm in the recent, fitful Black Mass. In Martin Scorsese’s The Departed, Jack Nicholson had his usual awful fun with a differently named variation on the character. He was a rebel. He was an outsider. You know. All the usual baloney.

Larry Donnelly, the writer and law lecturer who grew up in the same city, is having none of it. Following Bulger’s conviction for 11 murders in 2013, he wrote that the verdict “may offer some comfort to those who lost loved ones as a result of the evil activities of Bulger and his henchmen. However, it won’t change what happened to them.” Quite so.

Few nations are immune from the queasy celebration of the notorious thug. Many are the British tomes that celebrate such criminals as “Mad” Frankie Fraser, Charles Bronson (the other one), Lenny “The Guv’nor” McLean and, of course, the unavoidable Kray twins.

The celebrity that attached itself to those two East End brothers remains mystifying. They were drafted into swinging London and – identified as “nightclub owners” as you might call Hitler “a watercolourist” – found themselves standing massively beside the likes of Diana Dors and Barbara Windsor. How was it right for David Bailey to include Ronnie and Reggie in his portfolio of glamorous monochrome icons? They caused at least as much misery as the Moors Murderers, but you can’t imagine Myra Hindley being pictured with Judy Garland.

Oh, yeah. They only killed “their own” and they always looked out for the East End. When Reggie shoved a carving knife into Jack “The Hat” McVitie’s face he was, apparently, murdering somebody forgivably like himself. Any half-brained excuse will, it seems, permit the barely concealed celebration of teeth-juddering brutality. Bits of Spandau Ballet starred in The Krays (1990). Tom Hardy played both twins in Legend (2015). Neither film whites out the brutality, but nobody could deny the glamour of the casting.

Yes, the Krays and Martin Cahill kicked back against the establishment, but that would be nothing without the accompanying whiff of brimstone

Some of this goes on in Ireland. John Boorman’s The General (1998) offers an ambiguous portrait of the late Martin Cahill. He’s an awful man who does some terrible things, but his is still presented as a bracingly anti-establishment figure (so was Dr Crippen in his way). “For me, Cahill is an archetype of a certain kind of Irishman,” Boorman told The Irish Times at the time of release. “Like a reincarnation of a Celtic chieftain – the sense of celebration, cunning and wit, the violence and the hatred of authority.”

The lauding of Ned Kelly has lasted for so long it’s easy to forget that, no sort of freedom fighter, the great Australian larrikin was a cattle thief and a murderer.

No nation has, however, celebrated the uncommon criminal like the US. Michael Mann’s Public Enemies (Depp again) presents John Dillinger as a champion of the ordinary man during the worst years of the Great Depression. We could fill whole warehouses with studies of the films and novels that made icons of the old West’s formerly notorious outlaws. In both Arthur Penn’s The Left Handed Gun and Sam Peckinpah’s Pat Garrett and Billy the Kid, the sometime William H Bonney represents the perishing independent spirit of an increasingly bourgeois nation. Who would dare make Billy the Kid a hoodlum again?

It wouldn’t do to be too judgmental about all this. The world would be a worse place without GoodFellas or Bonnie and Clyde. Pat Garrett and Billy the Kid really is a masterpiece. But, as Bolger moves on to another place, we should at least acknowledge the creative self-deception at work here. If the films mentioned above were more honest about their subjects, they’d be a lot more difficult to watch. For as long as our species has told stories, it has suppressed reality and indulged its passion for the most appalling human instincts. Yes, the Krays and Martin Cahill kicked back against the establishment, but that would be nothing without the accompanying whiff of brimstone.