Taron Egerton: ‘You have to bet on yourself in this game’ 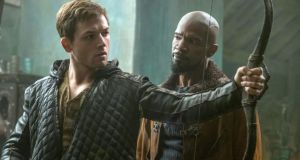 “Obviously on set you can’t have real arrows flying around.” Above, Taron Egerton with Jamie Foxx in Robin Hood

“Please maybe don’t print that bit,” pleads Taron Egerton for maybe the fifth time in 30 minutes. It’s not that the 29-year-old has massive scandal to impart; it’s simply that he keeps saying more than he ought to.

“There’s a big day coming up; I’ll need to get tickets for my mates,” he says. “No, wait. I’ve said too much about it. I really have to stop talking about Rocketman. I can see people involved in the film bristling every time I open my mouth. It’s just I’m really excited about it.”

Today the titular and energetic star of the incoming Robin Hood is wearing a hat indoors. He has a good excuse; it covers the high forehead required to essay Elton John in Rocketman, the biographical film that Egerton is trying hard not to talk about. Elton is a producer on Rocketman and a frequent visitor to the set. No pressure then.

“I mean, we knew each other a little bit anyway from Kingsman and we spoke a lot on the phone in advance of things,” says Egerton. “Then David [Furnish] and him invited me to come and stay with them and spend some time in their company, which I did, for a couple of nights. And then Elton gave me a very beautiful gift. He gave me his first diamond earring. And what he said to me was, ‘Look, this isn’t my life.’ This is based on elements of my life. You have licence here and I want you to make it your own.”

He laughs: “And that stressed me out a bit early on. Because there’s an expectation that you’ll mimic the person you’re playing. Filling in the blanks and guessing is almost harder than recreation.”

In the hours before I meet with the fiercely Welsh (albeit Birkenhead-born) 29-year-old actor, a flurry of news stories appear bemoaning his lack of participation in the Kingsman: The Great Game, the third film in the Matthew Vaughn-helmed franchise.

In 2013, some months after he graduated from the Royal Academy of Dramatic Art, the then unknown Egerton was cast by Vaughn in Kingsman: The Secret Service, a $414 million-grossing blockbuster about a secret league of gentlemen spies. The 2017 sequel, Kingsman: The Golden Circle, repeated the success with a $411 million haul.

“I’m surprised that it has been so written about,” says Egerton. “Because if you look at the press release that Matthew [Vaughn] put out, the new film is set a hundred years ago. I know anything can happen in the world of Kingsman. But I feel time travel might be slightly out of remit. I do know who’s in it. You’re not going to miss out. We will pick up our story further down the line. And that suits me, actually. Because I’m so intrinsically intertwined with those films, I’m happy to take some time to work on being Taron.”

Robin Hood, the first in a series of Hollywood reboots concerning Nottingham’s most famous outlaw, looks like a step in the right direction. The film, which stars Egerton as Robin, Jamie Foxx as Little John and Eve Hewson as Maid Marian, takes a very kinetic, contemporary approach to the material, replete with semi-automated arrows, rabble-rousing socialist rhetoric and costumes that might have come from Top Shop’s spring collection.

“It was full-on and uncompromising,” he nods. “There was a very specific idea about having this kind of frantic, dynamic high energy feel to it. I think it works really well. It’s quite different to what I’m used to with the Kingsman films, which are quite balletic, I guess.”

Egerton and Foxx trained with master archers Steve Ralphs and YouTube star Lars Andersen to ensure that the quivers would fly faster than in previous incarnations.

“I spent quite a lot of time just familiarising myself with it and making sure that I looked very fluent when it came to shooting,” says Egerton. “Because obviously on set you can’t have real arrows flying around because that would be fucking dumb. And then there was all the choreography and the gym time and the rest of it. I sometimes struggled with the rough and tumble of it. I was never a particularly sporty kid. I grew up with a lot of rugby around me. But I don’t like being bashed about. I prefer watching it in a bar with a pint.”

Egerton is just old enough to remember the TV premiere of Kevin Costner’s Prince of Thieves but still cites Disney’s cartoon fox as his favourite screen iteration. He is full of praise for his Irish co-star, Eve Hewson. Jamie Foxx, too, has described the Dublin-born actor as having “something incredible”.

“She came and tested with me and was by far and away the best of the Marians I tested with,” says Egerton. “She walked it, really. Everyone was incredibly impressed with her. I think the big thing about the Marian for our film was she couldn’t just be some sort of English rose. She needed to be someone with our own story and her own goals.”

Robin Hood was largely shot in Dubrovnik and Budapest’s Korda Studios. Egerton enjoyed the travel but remains absolutely rooted to Aberystwyth, where he has lived since his teens (having relocated to the Ceredigion university town from the Anglesey village of Llanfairpwllgwyngyll). He still hangs around with the same friends he did when he was 15; they routinely photo-bomb him at red carpet events. He says he has zero interest in transplanting to Los Angeles.

“Three hours on the train to Birmingham, three hours’ drive to Bristol,” he says. “You’re not near anything. Even other towns in mid-Wales. But because there’s a university and a lot of tourists, there are always people passing through. I moved there at 11 or 12 and that’s where I found my heart really. Around 15, I found myself in a really creative friend group of people who acted or were musicians. They’re still my best friends. Honestly, if there was a zombie apocalypse and everywhere else was buggered, as long as Aberystwyth was all right, I’d be all right.”

As a teenager, his supportive family and friends inspired him to get more and more involved in acting, even when that entailed a role as a bellows mender in a cocktail dress in a school production of A Midsummer Night’s Dream.

“I was deeply conflicted about it,” he recalls. “Because the exhihibtionist in me was very excited. But the 15-year-old boy me was terrified. That’s the thing, though. You need to do the things that scare you. Otherwise you’ll regret it.”

Fearlessness is something of a theme with Egerton, who has more than held his own opposite such actors as Tom Hardy, Hugh Jackman and Samuel L Jackson.

“I do feel lucky and I don’t take any of it for granted,” he says. “But I also believe in myself. When someone says: do you want to play Robin Hood? Of course there’s a voice in me that says: you can’t do it; it’s too big. But there’s another voice which kicks into gear that goes: well, what are you fucking here for? You don’t run a marathon and get to the finish line and jump back. You have to bet on yourself in this game. Everyone does. Obviously, there’s an element of luck and I have support from around me. But at some point you need some fucking tenacity.”