In praise of Autumn: Ireland is not a summery nation

As everything turns a deathly brown, it feels unpatriotic to favour any other season 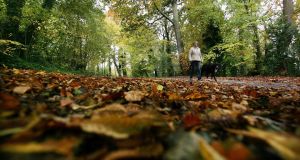 Everything turns the most comforting colour of all: brown with brown hints of brown. Photograph: Eric Luke

There are good reasons to prefer one colour over another. Who looks good in magenta? One can justify favouring hard, waxy cheese to the damp, rancid stuff the French love so much. But there really is only one decent response to an inquiry about your preferred season.

It’s not as if we’re coming down with options. Unless I’ve slept through the season where Toblerones split the earth and it rains vodka, there are only four to choose from. Summer is obviously appalling. There’s nothing good on telly and airports are packed with families going on their squalid little holidays. Winter has its virtues, but given that it can actually kill people – something our climate-changed summers are only now learning to do – it would take somebody even less cuddly than me to recommend it. Spring is all right if you like flowers, lambs, Easter and World Championship snooker, but the looming threat of summer tends to cast a sunny pall (if that’s not an oxymoron). May can, on occasion, be just as beastly as July.

The city is definitely at its best in autumn

The correct answer is, of course, autumn. The Keats stuff is, I suppose, worth celebrating: the mists, the mellow fruitfulness, the plumping hazel shells. But that’s mostly for people who can endure living in the country. Unless Thomas Hardy has led me astray, autumn is no less disgusting for rural folk than any other point of the year. It may even be worse. All those potatoes and mangelwurzels have to be picked before Master Grandhouse gets to press you lustily into the grubbiest corner of the greenhouse.

In contrast, the city is definitely at its best in autumn. If you really have to go outside, you’ll find the temperature poised in that perfect spot between too bloody hot and almost too cold for people who, raised in a northern isle, should have long got over complaining about frost.

Those at home to such balance will be equally easy with the lack of dazzle in the seasonal colour palette. The trees turn a vulgar shade of crimson in certain parts of New England. Here everything turns the most comforting colour of all: brown with brown hints of brown. Not the colour of life. Not the colour of death. The colour of dying. Which is what we’re all doing and there’s no point pretending otherwise.

That’s certainly what cinema tells us. Films with “autumn” in the title may (yay!) or may not (boo!) be set in that season, but you can count on them being about dying. There’s plenty of imminent death in Yasujiro Ozu’s Late Autumn and Ingmar Bergman’s Autumn Sonata. Winona Ryder is dying in Joan Chen’s Autumn in New York. The entire Cheyenne nation is dying in John Ford’s Cheyenne Autumn. None of your raucous Spring Breakers or your debauched Wet Hot American Summer here. Just soothing, brown dying.

Films on that subject – even those with no seasons in the title – are much more plentiful at this time of year. The exhausting rush of superheroes has eased off and the “awards season” movies are slipping into cinemas. This is a better thing than it used to be. Such movies are now less likely to be Out of Africa and are more likely to be Moonlight, Phantom Thread or Arrival. You will soon be spoiled for choice.

Once home from the film, the discerning autumn lover can sop up some of the great brown culture the ancients and not so ancients have bequeathed us. Virtually any record by the great English singer Sandy Denny will do. Who Knows Where the Time Goes? remains her best known song. “Across the evening sky, all the birds are leaving/ But how can they know it’s time for them to go?” it begins. Because it’s autumn, Sandy. That’s what birds do. Denny’s album The North Star Grassman and the Ravens stands as a musical treatise on the fears and attractions of autumn. Listen to that over brown food.

It feels almost unpatriotic to favour any other season. Ireland is not a summery nation

The Great American Novel is very much a phenomenon of climatic extremes. You need turn to the British and the Irish for properly autumnal diversion: William Trevor, Iris Murdoch, Elizabeth Taylor (the novelist). Few works of art better sum up the brown aesthetic than Barbara Pym’s Quartet in Autumn. It’s about quietly desperate Londoners seeking late comfort. It’s got dying in it. It’s actually has “Autumn” on the cover, for heaven’s sake. Read it while Denny’s Late November plays quietly in the background.

It feels almost unpatriotic to favour any other season. Ireland is not a summery nation. Nor is it a wintery nation in the way of Bergman’s Sweden or Dostoevsky’s Russia. It’s a nation at home to the relaxing slip into eternity.

Oh and The Great British Bake Off is on too.