As part of the Experience + Innocence show in Paris U2's lead singer has lots to say on Trump, the perils of success and how he’s only half a man without Ali 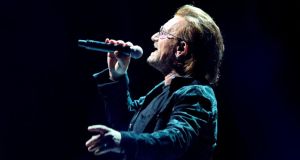 History, autobiography and anger at the state of the planet run through U2’s Experience + Innocence show, a return to the William Blake-inspired themes that the band explored in their last two albums.

A 360-degree stage ensures that no one in the audience is at a disadvantage. The band move from one end to the other of their 30m-long, 8m-high “barricage” to platforms at either end, while stunning graphics by designer Willie Williams scroll across two almost-transparent LED screens.

The technology is particularly effective when Bono strides down the barricage’s central walkway as cartoon images of his home street, in Dublin, flow past to the music of Cedarwood Road. When the band play Sunday Bloody Sunday the roofs, murals and slogans of republican and loyalist neighbourhoods speed by. A combination of video of the sea and cartoon waves seems to imitate the Japanese printmaker Hokusai as the band play The Ocean.

The show features moving footage of Bono’s parents’ wedding. His mother, Iris, to whom he was very close, died when he was 14. At various points in the concert Bono talks to his wife, Ali, and son Elijah Hewson (who now has his own band, Inhaler). It is a reminder that all art is rooted in personal experience.

In a startling confessional moment, Bono opens up on stage about the period, in the late 1980s, when U2’s phenomenal success went to the musicians’ heads. The manga-style cartoons now show the band in a white stretch limo. “Is this Las Vegas?” one asks. “No, it’s heaven,” says another.

“What fame does to a young man’s mind, it feeds him a lie that he is in some way better than real people, like doctors, nurses, teachers, firemen, policemen,” Bono says. “The lie continues. You’re a visionary. You see things that ordinary people don’t see. A perfectly sensible person taps you on the shoulder and says, ‘Wait a minute. You’re not a rock star. You’re little Paul from No 10 Cedarwood,’ and you go, ‘What are you talking about? Paul is dead. I have a new address. I live here. I’m f***ing Bono.’ ” The band then launch into Even Better Than the Real Thing.

Past tours had accustomed fans to political messages about human rights, poverty and development. In Paris U2 address the migrant crisis, the rise of populist nationalism in Europe, and the threat to liberal democracy. This is possibly their most political show ever.

The concert opens with images of European cities in ruins at the end of the second World War. In the closing speech from Charlie Chaplin’s The Great Dictator, the little barber from the Jewish ghetto, played by Chaplin in Hitler guise, lectures a mass rally on peace and tolerance. We see a cargo ferry on the Mediterranean, off the French Riviera, where Bono, Adam Clayton, the Edge and Larry Mullen all have homes. It morphs into flimsy boats carrying African migrants.

Scenes of desperate, fleeing refugees give way to images of angry, extreme right-wing demonstrators in Europe and the US. Bono uses Mr MacPhisto, the character he invented decades ago, to address climate change and Donald Trump’s scrapping of the Paris climate accord. The singer’s eyes are outlined with charcoal-black make-up. Video technology distorts his face on the giant screen into that of a devil. “It’s when you think I don’t exist that I do some of my best work,” MacPhisto says.

The devil played by Bono talks about “my friend Donald” and uses an unmistakably Trumpian accent to mock activists fighting climate change. “Hello, my little cabbages,” Bono says, alluding to a street march by environmentalists in Paris on Saturday. “You must be exhausted, because you spent all day spoiling a perfectly good walk by protesting with your banners and your little flags. And for what? For climate change! The greatest piece of fake news ever! F*** climate change!”

Jim O’Rourke’s brilliant Women of the World pleads with women to “take over . . . Because if you don’t the world will come to an end, and it won’t take long.” It is illustrated by images of the Edge’s daughter Sian, her hair streaming from under an army helmet.

Bono plays it humble in the prelude to One. Without the other three members of U2, he says, “I am only a quarter of a band.” Without his wife, Ali, “I am only half a man.” As the band play One, the audience hold up their smartphone torches, creating a haunting effect.

Love Is Bigger Than Anything in Its Way, their penultimate song, is an anthem to the LGBTQ community. A kaleidoscopic, gender-fluid, celebratory montage shows young people in Dublin, many with body piercings. Girls look like boys and boys like girls. Then, as the band play (13) There Is a Light, Bono paces the central passageway of the barricage, arriving alone at a small model of his childhood home. The house is lit from within. He opens the roof, and a large light bulb swings out. The other band members have gone. Bono appears on the verge of walking into the audience. “I’m home,” he says, before disappearing.

After two more shows in Paris this week, the tour passes through eight other European cities before reaching Ireland, for two nights in Belfast, on October 27th and 28th, and four in Dublin, on November 5th, 6th, 9th and 10th. The final performance, in Berlin on November 13th, will make amends to ticket-holders who attended the concert where Bono lost his voice on September 1st.

A certain suspense hung over the audience before and during the Paris concerts. Would Bono keep his voice? At times he seemed to be holding back, to conserve his voice, only to belt it out a few moments later. There is only one timbre at a rock concert: loud.

Normal People: Full-frontal nudity was not its most radical feature
9 Welcome to Dublin, unless you're black
10