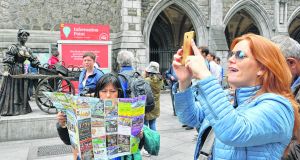 Tourists on St Andrew’s Street, Dublin. Tourism is likely to be affected by the coronavirus. Photograph: Alan Betson

Sales of electric and hybrid cars have raced ahead so far this year and both motor trade officials and economists will be keeping a keen eye on whether it continues, and at what pace. On Tuesday, the Central Statistics Office (CSO) publishes its figures for new cars taxed for the first time for February.

In January, electric and hybrid (alternative fuel) vehicles accounted for a fifth (20.8 per cent) of all new private cars, up considerably from 11.6 per cent in the same period last year.

It is an impressive surge, of course, but environmentalists and green-motoring enthusiasts will be the first to note that the overall proportion is still quite low (electric at the very outset of the year accounted for about 2.4 per cent of the new car market). Diesel engines remain the most popular.

Still, context aside it is an industry in motion. Fully-electric car sales rose by 11 per cent during the first few days of 2020 according to unofficial figures, meaning hybrids are ever less the safe zone for those hoping to leave the petrol pump behind.

Tourism set to be hit by coronavirus

It was only a matter of time before effects of the coronavirus spread to the business world, and although everything withers in comparison to the human toll and societal impact, the commercial impact will ripple for some time to come.

This week’s data on Irish tourism (CSO fourth-quarter travel data, Wednesday) is likely to be one of the last glimpses of an industry in full health for some time, or at least that will be the concern.

Previous statistics for Q3 showed the number of overseas trips to Ireland by non-residents increased by a slight 0.1 per cent to 3.334 million compared to the same period in 2018.

The number of nights spent here by foreign travellers, however, dipped by 4.5 per cent. This decline, according to the CSO, was most evident among US and Canadian residents (a decrease of 11.3 per cent).

Things are unlikely to improve in what is one of many unknowable long-term effects of the global health scare.

While the G7 has vowed to take any necessary actions to stave off an economic downturn, tourism – and specifically those willing to travel by plane – does not appear to have any viable fix.

Last week, things began to come into focus when Ryanair moved to cut a quarter of flights to and from Italy for three weeks from mid-March.

In a nod to cautious optimism, Michael O’Leary said: “Clearly passengers are already beginning to cancel or avoid air travel. Most of the airlines are reporting a large drop in short-term bookings, but I think it will be reasonably short term.” Investors and the tourism industry are watching.

In Q4, 2001, right after the September 11th terrorist attack, overseas visitors to Ireland dropped 2.2 per cent compared to the same period the year before. Transatlantic visitors fell by 15.5 per cent.