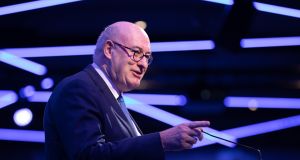 EU trade commissioner Phil Hogan: “We hope that this grandstanding is over and we get down to the real business because we have only nine or 10 months to do the job.” Photograph: Naoise Culhane

The apparent UK desire to renege on the Brexit deal and pursue a “hard” exit may be part of the “opening skirmishes” like in a sports match, according to the EU’s trade commissioner Phil Hogan.

The Irish commissioner said at an event in Dublin that it was “an absolute priority” for the EU that the withdrawal agreed by the EU and the UK was “implemented in the spirit and the letter, including the commitment to no hard border on the island of Ireland”.

He was referring to reports that British prime minister Boris Johnson had directed his negotiating team to find ways to “get around” the Brexit deal arrangements for an Irish Sea trade border to avoid a hard land border in Ireland.

The “mood music” between EU and UK negotiators had improved in Brussels as the first week of negotiations on a post-Brexit free trade agreement had proceeded, he told a conference at Croke Park’s convention centre, adding that he hoped to see more of this over the coming months.

Mr Hogan said the UK was “quite explicit” about wanting to avoid a crash-out Brexit but the February 17th speech by the UK’s chief negotiator David Frost in Brussels seemed to confirm that “the UK will renege on these commitments and is pursuing a hard Brexit”.

“It is difficult to take some comfort from the rhetoric coming from the UK in recent weeks but maybe it is like coming out onto the pitch on Croke Park: there is a bit of argy-bargy in the tunnel that you cannot actually do much about,” he said.

“But we hope that this grandstanding is over and we get down to the real business because we have only nine or 10 months to do the job.”

A big decision was required at the end of June from the British government on whether it wished to avoid a no-deal exit at the end of the year and to extend the standstill transition period.

He urged people at the conference on US-Irish business relations who have “influence in the UK to also make your voices heard because a no-deal Brexit will bring nothing but pain for all sides”.

The former Fine Gael minister expressed concern that firms were “sleep-walking” into trouble by not preparing for the reality that even if a trade deal is agreed, the UK would still be leaving the EU single market and customs union and this would have consequences for companies.

Mr Hogan was speaking at the Transatlantic Conference 2020 event hosted by the American Chamber of Commerce Ireland, which is sponsored by Aer Lingus, law firm Matheson and The Irish Times.

On international trade, Mr Hogan spoke about the need to overhaul the “global referee” in trade, the World Trade Organisation, to “ensure that everybody remains honest with each other”.

Reform was needed fast because the global system is dysfunctional at present and the trading rules were “designed for a different era” but the required change needed “buy-in from all players”.

Mr Hogan said that the EU’s economic success was “built on openness”, which it had a strong interest in maintaining, and that “any sign that our openness is being exploited will be dealt with swiftly”, he said.

“We will stand up against protectionism where it occurs and promote fair competition by levelling the playing field both internally and externally,” said Mr Hogan, who has been in the trade portfolio for three months.