New documents show that the bank declined to answer correspondence 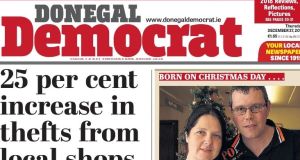 The liquidator of former newspaper publisher Johnston Press Ireland Ltd had to threaten legal action against the company’s bank to get about €2 million cash in its accounts, new documents show.

Johnston Press Ireland creditors voted to wind up the company and appoint Declan de Lacy, partner with accountants PKF O’Connor, Leddy & Holmes, as liquidator to the publisher in January 2019.

A report just filed by Mr de Lacy with the Companies’ Registration Office outlining his progress shows that by last month, creditors had filed claims with him for a total of €66 million.

Mr de Lacy’s report shows that he had to take the first steps in legal action against the bank where the company had €2.4 million in order to get it to transfer the cash.

The liquidator states that he had an “unusual difficulty” as the bank, for unknown reasons, declined to answer correspondence or transfer Johnston Press’s cash to him.

“The liquidator instructed solicitors to apply to have the bank’s company secretary examined and to obtain an order directing the transfer of funds,” he says.

“The bank commenced to co-operate with the liquidator upon serving a draft of the originating notice of motion and grounding affidavit proposed to be filed.”

A grounding affidavit is a sworn statement by someone outlining the basis of a legal action that they intend taking.

Neither the liquidator’s report nor other company filings name the bank. Mr de Lacy did not comment.

It is unusual for a liquidator to begin legal action to prompt a bank to allow access to cash in accounts belonging to the companies that they are winding up.

However, insolvency practitioners complain that banks are often slow to respond to requests for this cash to be transferred.

Mr de Lacy made an interim distribution to creditors of €1.2 million and his filing says that he will make further distributions once unliquidated debts are ascertained.

Johnston Press Ireland’s debtors owe it €90 million, but several of these are associated companies that are also in liquidation.

The report notes that it is not possible to establish what the company may realise from these debts. He does not expect there to be any funds available for distribution to shareholders once the liquidation is complete.

Johnston Press was not trading when creditors voted to wind it up last year. The publisher sold its 14 titles in the Republic to Formpress, part of Iconic Newspapers, for €8.7 million in 2014 as part of a restructuring.

Johnston Press Ireland was part of the former Edinburgh-based, London-listed Johnston Press Group which spent about €200 million buying Irish titles in the first decade of the century.

Cheap credit and the Republic’s booming economy combined to inflate the value of many businesses, including newspapers. The British company has since been restructured and renamed.