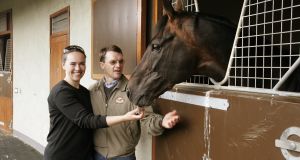 Racehorse trainer Aidan O’Brien with wife Anne-Marie at the Ballydoyle stables in Co Tipperary. Work practices at the yard have come under scrutiny by the Workplace Relations Commission. Photograph: Dara Mac Dónaill

In the case of an employer with a culture of seemingly excessive working hours, at what stage does volunteering for extra work become obligatory?

And at what stage should a responsible employer step in to protect staff from themselves?

As Robbie Manton, the head of yard at Aidan O’Brien and John Magnier’s Ballydoyle gave evidence at a Labour Court hearing on Monday, he repeatedly stressed that its grooms were happy to work at times when they should be off, because they had close bonds with their horses.

The Labour Court is hearing an appeal by Ballydoyle, the racing yard closely affiliated to the Coolmore Stud, against compliance notices from the Workplace Relations Commission over working hours the WRC argues breach rules on rest periods.

Manton submitted that even if a groom had only returned from a domestic race meeting the previous night at well past midnight, they often “chose” to come to work the next morning – in reality later that day – five or six hours later.

“They wouldn’t want anyone else to touch their horse,” he said.

The WRC’s lawyer, Noel Travers, said that even in November when the racing season was relatively quiet, that it appeared some Ballydoyle staff had worked 27 or 28 days in succession.

He was asked if he, and all his groom staff, took all their annual leave days.

“There has been a couple of times when I haven’t taken all my annual leave,” he said, before adding that he encourages grooms to take all their holidays.

“The girls in the office would have their hearts broke ringing the [grooms] to take their time off. But the lads just tell them: yeah, yeah, yeah...”

But is it any wonder that the office staff find it hard to convince the grooms to take all their time off, when their direct manager – Manton – appears so clearly imbued with the culture that says they shouldn’t?

Organisational culture is a powerful force. If it is the done thing within a company to start at 5am or 6am on a race day and get home at 1am, before returning to work five hours later, what power has an individual groom to do otherwise?