Will coronavirus be a test case for remote working? 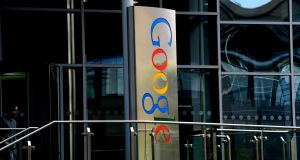 Some staff at Google in Dublin – where there are more than 8,000 employees – were told to work from home. Photograph: Cyril Byrne

Tech giants Google and Twitter have in recent days asked staff to work from home where possible in order to alleviate fears and risk of coronavirus contagion among their workforces.

Some staff at Google in Dublin – where there are more than 8,000 employees – were told to work from home after a co-worker reported flu-like symptoms. Twitter said it was deep cleaning and sanitising all its offices for those who needed to attend them.

Both companies said the measures were being taken “out of an abundance of caution”, but the practice of remote working is something companies have been exploring the feasibility and efficiency of since long before any of us had heard of Covid-19.

Google, for example, said all staff would take part in its company-wide work from home day on Tuesday. This will test its wider preparedness for a crisis, but also, no doubt, the company will look closely at what the day meant for its levels of productivity.

These aren’t the first companies to tell staff to stay at home. Last month, employees at the Irish offices of online recruiter Indeed, where there is 1,000 staff, were told not to come in due to concerns a staff member may have been exposed to the coronavirus.

Separately, a report published on Tuesday morning claimed that a quarter of the workforce is now classed as working remotely, something it defines as “working from home and/or in shared spaces”.

The Sigmar EY 2020 Talent Leader Pulse Survey, which is the largest HR and employment survey in Ireland with 326 senior executives taking part, also said the flexi-workforce now makes up 21 per cent of the total workforce.

So far though – and with only one confirmed case of Covid-19 in the Republic – most companies are having their staff operate as normal, except in cases where individuals are experiencing flu-like symptoms.

But we can see how Irish companies and multinationals here might behave in the event of a bigger outbreak by looking at what companies have done in other jurisdictions where the issue has arisen.

HSBC Holdings and Royal Dutch Shell sent staff home in Hong Kong and Singapore after contact with people infected by the coronavirus, adding to concerns the disease will spread more broadly across the two Asian financial hubs.

Facebook employees based in China, and those who recently returned from trips to the country, were also told to work from home. Of course, China is ground zero, but it nonetheless makes for an interesting case study of remote working on a massive scale.

With millions working from home for many weeks now, there has been a spike in second-hand laptop and tablet sales, while Alibaba’s collaboration app DingTalk surged to the top of the Chinese App Store charts.

Other companies and products that facilitate remote working, such as the video-conferencing service Zoom and the chat app Slack, which allows groups of people to share ideas and comment in real time, have also been reaping the benefits.

Indeed, a number of companies offering tools and software to facilitate remote work have enjoyed significant bounces in their share prices since the virus began to spread.

Zoom has seen its share price rise by about 11 per cent over the last week, while shares in RingCentral, another communications offering that sets up meetings over the internet, have soared by more than 40 per cent so far this year.

Other tools include Google Drive, which is a cloud storage platform that keeps files in one secure and centralised location. Remote workers can store and share documents, spreadsheets, and slide presentations.

For large files that won’t send via email, Dropbox offers various features for managing remote employees who can sync, share and collaborate on documents.

Elsewhere, Firstbase is a start-up that supplies equipment for remote workers. For a monthly subscription per worker, it provides them with delivery, upgrades, maintenance, and repairs of software.

Firstbase says its product lets companies slash real estate costs by as much as 80 per cent; saves workers 22 days every year by not having them commute to an office every day; and saves companies 255 million desk jobs globally.

However, one of the obstacles faced by companies who want to keep potentially infectious staff members away from the rest of their workforce is a reluctance among some to self-isolate if they think they might be sick.

Workers in the service industry, such as those in restaurants, retail, childcare and the gig economy, are much less likely to have paid sick days, the ability to work remotely or employer-provided health insurance.

Not only could this mean the virus will be more difficult to contain, it could also mean that it will disproportionately affect those earning lower incomes.

Perhaps with that in mind, the Government has said it may approve income support for workers who had to self-isolate due to the risk of spreading coronavirus. It is due to publish guidelines for businesses dealing with absent workers shortly.