Perils of confusing management with leadership

Crucial difference between managing work and not individuals, claims expert 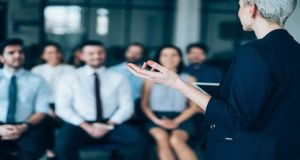 After a lifetime spent contemplating the complexities of organisational behaviour, the veteran business writer and social philosopher Charles Handy has concluded that, while the working environment needs to be managed, “people can only be encouraged, inspired and led”.

Now 88 years old and still working – his book, 21 Letters On Life and Its Challenges, was published in June last year – Handy has become uncomfortable with how management (which should be reserved for things) and leadership (which is all about people) have become mingled. He believes the term “management” has been roundly abused by those who use it as an excuse to exercise power over the people working for them and he strongly believes that “managing people, instead of leading them, is wrong and has resulted in too many dysfunctional and unhappy workplaces”.

There are few who would disagree with Handy’s overarching thesis. Unhappy and dysfunctional workplaces are a lot more common than happy, well-functioning ones and a big part of the reason is bad leadership in all its manifestations.

Leadership roles are unquestionably demanding because they’re often a fraught juggling act – torn between delivering on commercial expectations, meeting strategic goals and keeping teams productive and motivated. Few enough people can juggle these often conflicting demands with ease but most managers, according to those who work for them, need to do a whole lot better.

This may well be because people don’t really like being “managed”: it implies they are a resource controlled and used by others as they see fit. People like to think they have choices around work, and to some extent they do. However, Handy points out that, “in signing away our right to our time (by working) we have ceded power over the most active part of our lives to others in the conviction that it is in our interest to do so”.

Lotto winners aside, most people don’t have a choice in the matter. They need paid work and most would prefer the time spent doing it to be happy and productive. Humans have a natural inclination to please and to try and do a good job, but nothing kills motivation and enthusiasm faster than poor management behaviour, attitude and practices.

Ask employees for examples of what drives them nuts about their managers and the list takes on a life of its own. At the more benign end of the scale are frustrating behaviours, such as being disorganised, procrastinating, taking too long to respond, constantly kicking things “upstairs” for decisions and being sparing with thanks and praise.

Delegating a task and then proceeding to “back seat drive” it to its completion annoys the hell out of people as does micro-management, being afraid to assign responsibility and constantly landing tasks with tight deadlines on people’s desks at five in the evening.

Dig a bit deeper and people start mentioning the more serious demotivating practices such as having their time excessively monitored, constant nit-picking, highlighting things that have gone wrong not what’s gone right, swiping ideas with no acknowledgment and withholding information people need to do their jobs.

Mine down to the next layer and the picture becomes a great deal more sinister as people mention the pressures of working with managers who perpetuate a debilitating blame culture, sexually harass or bully them, criticise them in front of other employees and subject them to constant scaremongering about the health of the business to a point where they are constantly afraid of losing their jobs.

Even as kids, we are hardwired to avoid the loud mouths in the playground who get what they want through fear. Most people have an expectation of safety and trust in their workplace. But when fear or intimidation – subtle or covert – start being used as management tools then it’s a short hop to a toxic culture where people have no autonomy and are afraid to open their mouths for fear of reprisal. On a very practical level, organisations that allow dysfunctional management practices to go unchecked are ultimately shooting themselves in the foot as they invariably lead to high rates of absenteeism, long-term illness and employee turnover.

One might think that big organisations led by high-calibre managers would know better than to overstep the mark by breaching people’s trust at work. But last month, banking giant Barclays scrapped a system it had introduced to track employees. The system logged the time staff were spending at their desks and sent warnings to those taking what were considered overly long comfort or refreshment breaks.

Barclays said it had introduced the system in the interests of raising productivity and preventing individuals from over-working.

Employees did not see it like that, nor did privacy campaigners who deemed it intrusive and pointed out that it was unacceptable to use technology to treat employees in a way a human being would never get away with. Following a backlash from staff, the tracking was stopped.

Handy is not suggesting that organisations don’t need to be managed. They do. “The flow of work needs to be compartmentalised and people need to know what they are required to do, by when, and to what standard; but that is managing the work, not the individuals. The difference is crucial,” he says.

“If I know what I am meant to be doing and I believe it to be either useful or necessary, I will do it without someone looking over my shoulder.”

Lucy Kellaway: We will miss the office if it dies