Coronavirus: No plan to cancel St Patrick’s Day parades ‘at this stage’ 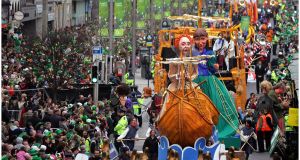 A leading international virologist and expert on influenza has said the Government should cancel St Patrick’s Day parades to avoid the spread of the coronavirus. Photograph: The Irish Times

The Government is not advising “at this stage” that St Patrick’s Day parades should be cancelled because of the coronavirus threat, Taoiseach Leo Varadkar has said.

Speaking at a press briefing in Government Buildings on Tuesday afternoon, he said the Government expected the coronavirus Covid-19 to spread and it was likely to change its approach as further cases emerged.

Asked about St Patrick’s Day parades, Mr Varadkar said there was only one confirmed case of the virus in the State “so we’re not advising anyone to cancel any gatherings at this stage.

“But bear in mind that the St Patrick’s Day festival is two weeks away and a lot can happen between now and then.”

He added: “There will be new advice published later today or tomorrow.”

Minister for Health Simon Harris said the Government was talking to public health experts and virologists on a “daily and often on an hourly basis” and taking their lead.

He was speaking following a briefing at the Cabinet about the efforts to tackle the virus and to prepare for its potential spread.

As businesses in Ireland continued to deal with the threat, Google said its staff at Barrow Street in Dublin were being asked to work from home for a second day as a precautionary measure after an employee reported flu-like symptoms.

Google told most of its 8,000 Irish staff and contractors to work from home on Tuesday, and it said this policy would continue on Wednesday.

The number of Irish people tested for coronavirus more than trebled over the past week, a period that saw the Republic record its first confirmed case and a massive surge in cases worldwide.

Almost 400 people have been tested for the virus since the current outbreak started in January, public health officials said on Tuesday, compared to 90 this time last week.

All but two of the tests, one involving a woman who travelled from northern Italy and the other involving a school student from Dublin, came back negative.

The increase is mainly due to a widening of the number of areas of the world subject to coronavirus-related travel advice.

Previously, the Department of Foreign Affairs’s travel advice was confined to travellers from China, but it now encompasses other areas, including Japan, Hong Kong, Iran, and four regions in Italy where restrictions have been imposed.

Anyone coming back from these areas and who feels unwell is being advised to contact their GP and may require testing. Italy, the European country worst affected by coronavirus, has exported cases to many other countries, including Ireland.

Speaking before the second case in the east of Ireland had been confirmed, Mr Varadkar said: “The situation is still evolving. This is a new virus and a virus that we don’t know everything about yet. So advice and actions and policy may change as we know more. But there is a moderate to high risk of more cases.

“A small percentage of those people may get very sick. But... some of the actions that you see in other countries are not necessary in Ireland at this stage.”

The Taoiseach said: “What we’re pursuing in Ireland at the moment is a policy of containment, making sure that any cases that are identified are contact-traced and we contain any potential outbreak.

“But we may come to stage in a few weeks time if that’s not successful where we move to mitigation phase, and that would be treating the ill, rather than trying to contain the virus but we’re not at that stage yet.”

Mr Varadkar said that most briefing would be done by the chief medical officer and other doctors, rather than politicians.

He added the advice the Government was giving to people was simple – wash your hands, cough and sneeze into a sleeve or tissue and people who had been in an affected region who developed symptoms should contact their GP and “self-isolate”.

Minister for Health Simon Harris said experts – “the best brains in the world” – were continuing to learn about the virus. He said any decisions made by the government would be guided by public health and by science – “not by politics”.

There was some confusion on Tuesday morning when the Department of Health initially denied it had advised members of a Dublin youth group to “self-isolate” before retracting that denial. On Monday, the HSE sent a letter to parents of children who are members of the group saying a case of coronavirus had been identified in a person who attended a two-hour meeting of the group last weekend.

The group is linked to the first confirmed case of coronavirus in the Republic.

Asked about the department’s initial denial in a now-deleted tweet, Mr Harris said: “People acted in good faith in responding to what was a very dynamic situation. . . People are working flat out, they’re working seven days a week . . . and people are answering questions in good faith and on this occasion that good faith turned out not to be true.

“But what’s most important to the public is the clarification that measures have been taken on a precautionary basis,” he said.

Earlier, a leading international virologist and expert on influenza said the Government should cancel St Patrick’s Day parades to avoid the spread of the coronavirus.

Prof John Oxford said Chinese authorities cancelled the Chinese New Year celebrations and Ireland should take this opportunity to stop the spread of the virus.

“The Government should take it a bit more seriously, I know you’ve got only one case [of the coronavirus], but it’s quite likely you’ve got the virus spreading around - this is pretty infectious. It’s not like measles and it’s not quite as infectious as flu, it just moves quietly,” he told RTÉ radio’s Today with Seán O’Rourke Show on Tuesday.

“Like in northern Italy, they sat there for weeks thinking they didn’t have a case, everything was fine, suddenly there was an explosion - they’re the new epicentre now.

“I heard this morning that Italians are now importing the virus back into China, into areas where they’ve not had it before.”

Prof Oxford said St Patrick’s Day parades are held all around the country, not just in Dublin. “Every little place has a parade, on top of that you’re getting lots of visitors in from abroad, from all over the place.

“If I were in their [the Government’s] shoes I would say ‘we must postpone it’, it’s not the end of the world for one year. Don’t have it this year because of the things going on, after all the Chinese postponed the Chinese New Year, which is immense. They took it so seriously.

“I would take advantage of the situation you’re in, so that you could prevent a big out break, by taking these actions, I would go ahead and stop the parades.”

He added that this is “a very fruitful opportunity for the virus to get a grip on your country and start spreading.”

Prof Oxford also said he did not support plans for the Cheltenham racing festival to go ahead.

New measures to combat the spread of Covid-19 are also likely to be announced following a meeting on Tuesday of the National Public Health Emergency Team, which will be considering fresh advice from the European Centre for Disease Control.

The emergency team will also bring forward recommendations on limiting mass gatherings due to public health concerns over the virus, which may impinge on St Patrick’s Festival and other upcoming public events. It is also likely to recommend the transfer of testing of suspected cases from hospital emergency departments to the community.

Ryanair has decided to cut flights for three weeks from the middle of this month as the virus outbreak hits bookings.

The airline has told passengers it would cut its short-haul flight programme, mainly to and from Italy, by up to 25 per cent from March 17th to April 8th.

It blamed a “significant drop in the bookings over that late March/early April period, in response to the Covid-19 virus” for its decision and said a significant number of passengers were not showing up for flights, particularly those to and from Italy.

1 Coronavirus: Non-essential travel from US set to be banned within days
2 Covid-19 incidence in the Republic set to surpass that of UK
3 ‘Our hearts are broken’ – implications of fresh lockdown sink in
4 Man whose remains lay undiscovered for 10 years to get family burial
5 German nudist chases wild boar that stole laptop at Berlin lake
Real news has value SUBSCRIBE