After a career with Reuters, the Dubliner set up his own literary agency in London 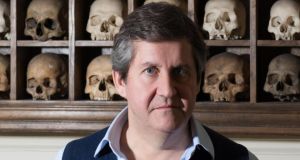 Ivan Mulcahy says that being a literary agent is “a truly great job, entertaining and always a privilege”. Photograph: Debbi Clark

If Ivan Mulcahy ever writes his life story, the opening chapters will read like an inspirational how-to guide for aspiring corporate high-flyers.

Though he rocked up in London in 1984 with a “ropey” degree from Trinity and “a talent for partying”, once he got a foot in the door at news agency Reuters, his natural business flair saw him rise swiftly, and seemingly effortlessly, up the corporate ladder. By his mid-30s, he was managing a staff of about 300 people and was responsible for all of Reuters’ business across the Nordic region. By most people’s reckonings, the Blackrock man had it made.

But Ivan Mulcahy is not most people: as the crossroads age of 40 approached, he made the dramatic decision to switch genres. Though he had no contacts or experience in the publishing industry, he figured he could make it as a literary agent, selling authors’ books to publishers and managing their careers.

He was a huge reader and knew he had the ability to sell and to negotiate contracts, but his secret fear was that he wouldn’t be able to spot raw potential in a manuscript.

“The question was: ‘Did I have taste?’” he says. “Publishers need to feel that when I recommend a new writer, they should take notice.”

Mulcahy felt the fear but did it anyway, setting up the Mulcahy Associates literary agency in London and beginning the hunt for unpublished authors. He spent his savings and earned almost nothing for three years. In the fourth year, the agency turned a profit and Mulcahy was finally able to pay himself a living wage.

“I went out and bought a Cartier watch to mark the moment,” he says. Mulcahy, who describes himself as a left-wing capitalist, admits with self-deprecating humour that this celebratory splurge makes his leftie credentials “a tad suspect”.

More than a decade on from striking out on his own and it’s clear Mulcahy does have taste. Recently the agency had three bestsellers in the UK book charts at the same time: Vivienne Westwood’s own story written with historian Ian Kelly; comic David Mitchell’s collection of essays; and broadcaster Clare Balding’s second volume of memoir.

He takes great pleasure in introducing the world to new talent, such as Irish novelist Lisa McInerney whose debut novel The Glorious Heresies will be published this year. He also persuaded Cambridge University economist Ha-Joon Chang from South Korea to write for general readers about economics. Today, Ha-Joon’s books have been translated into more than 40 languages and have sold millions of copies.

After spending a few years in London with Reuters early in his career, Mulcahy says it took moving to New York in 1987 to sense that being Irish was an advantage.

In London, “you were sometimes taken less seriously than your British colleagues”, he recalls, though he stresses that being Irish in London became a more positive attribute over time.

“But in New York, being Irish felt equivalent to minor celebrity status . . . I’m shallow enough to enjoy any special attention,” he jokes. “It made connecting for business easier too. You stood out a bit.”

After four years with Reuters in New York, Mulcahy returned home to run the company’s Irish operation. During his time here, Reuters launched its Irish news service, which meant it was, for the first time, reporting constantly on the Irish financial market for its worldwide customer base. Though the launch was a success, Mulcahy wanted to get away again.

His next move took him to Stockholm where he was responsible for the company’s business in north Europe. It was there his left-wing leanings grew stronger as he was struck by Scandinavia’s more egalitarian version of capitalism. “Over 300 staff on my payroll, yet when you looked at their salaries, you could see that everyone from senior managers to office assistants were earning amounts within a pretty tight range. And I thought, why not? They all worked hard and had skills.”

Now back in London, he says being a literary agent is “a truly great job, entertaining and always a privilege”.

So what do the next few chapters hold for Mulcahy and his business? Despite the Doomsday soundings about the future of the book trade, he says publishing has a healthy marketplace with lots of sellers and buyers, “but it is seeing the dangers of excessive corporate power with the increasing dominance of Amazon as a bookseller”.

Amazon charges lower and lower prices for books in order to grow its customer base, he says, and of course readers don’t mind because books are cheaper and Amazon runs a “strikingly efficient service”, but there are consequences. “The profits being stripped from the industry mean authors are offered less money by publishers and struggle to live by their writing income.”

Mulcahy speculates that after all the hype and the massive changes that must take place in publishing, the book will thrive in both physical and electronic form.