Wild Geese: ‘If you have a good idea, there’s room here for you’ 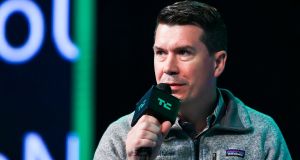 Gareth Keane: “I’m a technology optimist. I know there are negatives but, overall, we are better off now than we were, say, 30 years ago.”

The Pacific coast of Canada and the United States is a tantalising place and it has a special draw for technology investor and enthusiast Gareth Keane, who spent his childhood years there. Born in Vancouver, he moved to Galway with his family as a child, but was to return when he finished his studies.

After leaving school, Keane studied electrical engineering at UCG (since renamed NUI Galway) between 1990 and 1994 before going to Belfast to complete a PhD in the field of semiconductors at Queen’s University.

“It was very technical and specific. I was there full time for three years and part time for a further two, while also fulfilling a research assistant position,” he says.

“At the time, what I was doing was pretty cutting edge, so, after I finished, I moved back to Vancouver with my wife, whom I had met in Belfast.”

Keane was offered a job at PMC-Sierra, where he started off as a CAD engineer in 2000, working on power estimation and reduction methodologies, before managing a team of engineers who defined and drove the company’s semiconductor technology road map.

“It was an interesting time at the company. As the dot.com bust happened in 2000, we went through seven to eight rounds of layoffs. As a result of the changes the company was going through, I became more interested in the business side of things.”

After working in various roles over an eight-year period, Keane reached a crossroads.

“I weighed up my alternatives – either get involved in start-ups and place myself in a good position in the Bay Area or go to business school and learn more about the business aspect.”

So, in the summer of 2008, he moved his family, now including two small children, to Philadelphia to complete an MBA at the Wharton School of the University of Pennsylvania majoring in entrepreneurial management and finance.

“It wasn’t an easy decision to make, especially as I had a young family and MBAs are notoriously expensive, but it was worth it. At 36, I was on the older side of the spectrum of the 850 people taking the MBA, but that was also a positive thing.”

During the full-time, two-year programme, he was selected as a leadership venture fellow and helped lead a team of peers on a trip to Antarctica. “I also became a teaching assistant, and was exposed to incredible talent and diversity.”

Armed with an MBA from one of the world’s top business schools, Keane headed for the San Francisco Bay Area with the view of working in venture capital and investment.

“There’s nowhere like it in the world. The ecosystem here, the resources, the people, the companies. If you have a good idea you will find a network of people to support you here and magic can happen. I’ve seen it with my own eyes.”

In July 2010, Keane took up a role in the corporate development team at National Semiconductor, based in their Santa Clara campus south of San Francisco. “I focused on strategic investment opportunities, corporate strategy, working with entrepreneurs, VCs and corporate leaders. National also sponsored me as a Kauffman Fellow, a two-year venture capital fellowship,” he says.

When the company was acquired by Texas Instruments, Keane worked in corporate developments, but ended up leaving after the company announced it was moving to Dallas.

“Silicon Valley is just too beguiling, and so I stayed and worked with start-up investors Qualcomm Ventures as an investment manager.”

The corporate arm employs 20 people as investors in the Bay Area, Beijing, Seoul and around the world, with about €150 million to €200 to spend on start-ups per year. “So it’s pretty big. Google has around €300 million at their disposal for comparison.”

Keane has worked with companies such as Pelican Imaging, which is developing an innovative new arrays of camera for mobile devices, and Airmap, which is developing a software platform to manage the complexity around air traffic control of the emerging UAV (unmanned aerial vehicle/drones) ecosystem among others, “but I left in May this year to partner at Promus Ventures, investing in early-stage deep-tech software/hardware companies”.

“At the moment, I’m dealing with companies that built nano satellites, space-related stuff and swift navigation GPS robots. People are fearful of AI and there are technological shifts taking place, but that too will open up new opportunities,” he insists.

“I’m a technology optimist. I know there are negatives but, overall, we are better off now than we were, say, 30 years ago. In the 1990s, computers and mobile phones were exclusive; now the remotest places in Africa or Asia have access to them,” he adds.

“There will be a time when self-driving trucks will be common – they’re already in use in California – or machines will work on hot, greasy grills in restaurants and jobs will disappear. But then there will be other jobs that didn’t exist before like those to maintain automated cars. It’s just progress and if we manage it, it’s incredible.”

Keane has no intention of coming home, despite high living costs. “Famously this part of the world isn’t cheap but if you want to work in tech it’s the only place to be. And as far as making money is concerned, there’s no ceiling. If you have a good idea, there’s room here for you, people will work with you, invest in you. It’s not an exclusive club.”

He says the Irish network in the region is fantastic. “Irish people who come over here work really hard, are open, supportive and can be relied upon. As I work in venture investment, I’m always looking forward to hearing all about what people are building.”